RESEARCHING THE TECHNOLOGY OF MAKING BEVERAGES OF CONTAINING FRUIT JUICE

This article presents the results of the analysis of the chemical composition of milk thistle seeds (Sílybum mariánum), biologically active substances, as well as the rationale and development of the technology of functional drinks based on the extract of this plant material.

Today, alimentary diseases occupy the highest place among the most common diseases in the world, causing disability and death. It is known from world experience, that functional foods are effective in the prevention of alimentary diseases. It is important to carry out research work on preventive food products, to introduce the results of research into production and to expand the range of this type of food products.

One of the modern ways - in this area is the separation of biologically active substances from medicinal plants and their enrichment and increase of biological performance, effective use of natural raw materials and products through the inclusion in the recipe of food products, including fruit juices.

Blessed thistle (Silybum marianum L.) which one of the most widely used plants in folk medicine and modern pharmaceuticals, was selected as the object of research. As mentioned above, many drugs used in liver diseases are produced on the basis of blessed thistle. The flavolignans contained in the seeds of this plant have hepatoprotective peculiarities: improving liver function, regenerating cells, preventing fatty liver and stopping fibrosis. Taking into account the given peculiarities of the plant, research work was carried out on the technology of preparation of functional drinks based on plant biologically active substances. The blessed thistle plant was grown in the fields of Chartak district, Namangan region, for research purposes, and the fully ripe fruit was harvested in August. After drying in the open air and in a cool place away from sunlight, the stem and the basket part were separated (figure 1). 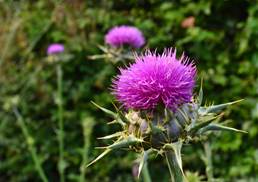 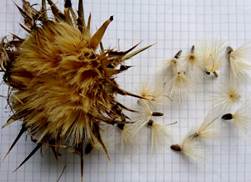 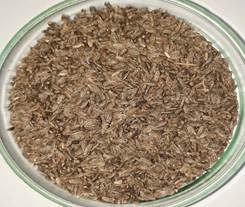 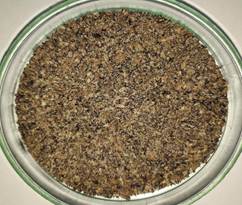 Optimal conditions of the extraction of biologically active substances in plants were determined. Extraction with 60, 80, 96% ethyl alcohol was carried out to determine the solubility of the main active ingredient of the raw material in liver function - flavolignans, including silymarin and silibin in relation to the extractant. The temperature was 700C and the duration was 60 minutes.

The results obtained are shown in the graph below.

Figure 3. Solubility of silymarin and silibin relative to the extractant concentration

According to the results, the dry matter content was 22.3% when the ethyl alcohol content was 80%, and it was observed that silibine and silymarin were transferred to the solvent in large amounts according to the dry matter content relative to the extract in the two tubes studied in parallel. When the alcohol concentrations were 60% and 96%, the flavolignans were found to be less soluble than the 80% alcohol. When plant seeds were extracted in 80% ethyl alcohol, the amount of silymarin peaked at 18.92 mg / 100ml. Hence, 80% ethyl alcohol was found to be the optimal concentration for flavolignane extraction. Also to study the dynamics of accumulation of flavolignans in blessed thistle plant seeds.

The process of growth, development and maturation of seeds of blessed thistle plant grown for experimental purposes was observed. The plant planted in irrigated areas is taller than blessed thistle plants, which grow in non-irrigated and direct sunlight and arid areas, up to about 110-120 cm, the stems are slender leaves are large and the basket is small, the seeds are small and empty. The ripening process of the seeds was also observed to be 20-25 days later than that of the blessed thistle plant, which grew in arid lands. Blessed thistle grown in non-irrigated areas is shorter, 60-65 cm, the stem is strong, erect, sparsely branched, the basket is large, the seeds are large and dense. The seeds ripen in late July and early August.

The results obtained are shown in the figure below. 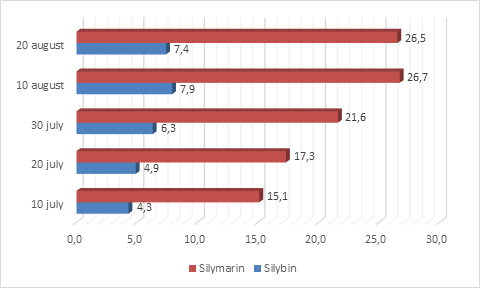 Figure 4. Dynamics of accumulation of flavolignans in blessed thistle seeds

As can be seen from the graph, the amount of silymarin in the seeds harvested on July 10 was 15.1 mg/100 ml, but by August 10, this substance had reached its maximum content in the seeds of the plant. It then decreased slightly in quantity to 26.5 mg/100 ml. Similarly, the period when silibin was most concentrated in the plant was between August 10 and 20. From the results obtained, it can be concluded that the most productive season for obtaining biologically active substances from the seeds of blessed thistle is mid-August, during which time it is recommended to harvest the raw material.

It was during this period that we determined the amount of flavonoids in the plant seeds collected. One of the most important biologically active substances of the blessed thistle plant are flavonoids, which are known to have antioxidant and hepatoprotective properties. Flavonoids protect the body from the development of cardiovascular disease, cancer and liver disease. It also prevents the accumulation of fat in the body and liver. The amount of flavonoids such as rutin, luteolin, naringenin, quercetin in plant extracts was determined.

It can be seen from the table that the flavonoids are maximally soluble when the ratio of raw material to extractant is 1:20. In particular, the amount of luteonin was 4.93 mg /100ml, which was found to be the highest among the flavonoids studied. When the ratio of raw material to extractant was 1:40, the flavonoids passed into the solvent in very small amounts and the total amount was 1.68 mg /100 ml. It was found above that flavolignans dissolve in the extractant to the maximum extent when the amount of raw material and extractant is in a ratio of 1:20. It was in these proportions that the flavonoids were also observed to pass into the solvent in the greatest amount. In particular, the high content of flavonoids, which are widely used in the prevention and treatment of cancer, cardiovascular disease, leads to a further increase in the prophylactic properties of the finished drink.