The main advantage of this method is the simplicity and law cost of technological equipment, and also the possibility of combining various operations in one metal.

The advantage of this method is also the performance of the method.

Analysis of scientific and technical literature and industrial implementation experience has shown that electrohydropulse piercing (EHP-piercing) is one of the most progressive technological processes.

The main advantage of this method is the use of simple technological equipment.

The priority in the field of application of high-voltage discharge energy in liquid for deformation of various materials belongs to Soviet inventor L.A. Yutkin [1].

The schematic diagram of EGISH and its equivalent electric circuit are shown in Fig. 1. When a capacitor battery discharges on a spark gap, a low-temperature high-pressure plasma is formed in the liquid.

The plasma channel, expanding in the liquid creates a pulse pressure, which affects the sheet workpiece, carrying out the required technological operation. 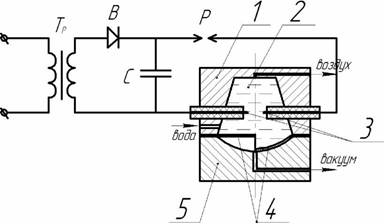 The main advantages of EGISH compared with the methods of punching in rigid dies are simplicity and cheapness of technological equipment due to the use of only one of a pair of rigid tools; the possibility of obtaining in one technological transition larger, than with static loading, limiting values of the degree of shape change of the blank, increased accuracy of stamped parts due to reduction of the elastic after-effects of material under pulse loading and combined performance of various operations in one die. 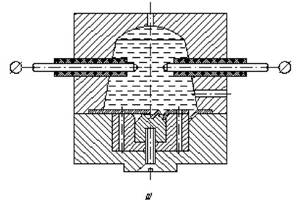 To carry out technological operations, electrohydropulse presses (installations) are used with an energy capacity of up to 150 KJ, which allow you to create pressure on the workpiece over 1000 MPa at a speed of its deformation up to 300 m/s

Strength limit of rigging elements is determined by design features, feasibility studies, and safety of EGE units maintenance. Known EGE installations have a value of 5-50 kV.

The time of energy release into discharge channel is not long and is of the order of several tens to several hundreds of microseconds, so due to impulse formation in the liquid volume of discharge beginning, having pressure of the order of tens of thousands atmospheres and temperature of the same order, high instantaneous pressures appear on the border of channel-liquid interface, which form a shock wave at a certain distance from discharge channel.

According to the studies, the shock wave is formed at the moment when the maximum discharge current velocity is reached, i.e. in the first half-period. After shock wave formation in the zone between electrodes the process of discharge channel expansion proceeds accompanied by bright glow.

After the end of the discharge the process of rapid formation and expansion of the gas cavity (products of liquid decomposition) begins. As a result, the liquid receives radial movement of Fig. 1.5, called hydroflow.

Then the process is repeated and there may be several such pulsations. Computer simulation of sheet metal fracture during separation operations is devoted to a number of works, for example [1].

In the last two works, the finite-element complex LS-DYNA [17] was used, which allows effective modeling of the process of metal fracture. Judging by the materials of the above-mentioned works, the destruction of the workpiece in the separating operations of metal forming pressure treatment (MPT) is one of the most complex and least studied sections of the theory of MPT.

Predicting the parameters of workpiece fracture during separating operations of sheet stamping will allow to correctly design technological processes related to material fracture and will allow to estimate the accuracy of obtained parts, shear quality, the impact of blunting of cutting edges of the tool and other parameters of the designed technologies.

One of the goals of my dissertation work is to develop a method of estimating the stress state at the matrix edge. Therefore, it is advisable to use the finite-element complex LS-DUNA and use the methods given in [2].

In these works, the critical strain on the limit strain diagram, when the second principal strain is equal to zero, is used as the criterion for fracture.

To determine the critical strain for steel 12X18H9T with a thickness of 0.55 is supposed to make an experiment.

The fracture criterion based on, will be as follows: the fracture of the sheet material occurs when the path of deformation in the space of principal deformations crosses the given curve. Failure is a probabilistic process, so the desired curve is taken as the lower boundary of the zone where the probability of loss of stability becomes noticeable