This article, deals with improved drainage and mole implements and the technology of their application in highly saline irrigated lands. Existing drainage and mole implement has some drawbacks, as it has one working body, lower productivity, during operation the stability of the course is lost in the depth of the gun and the weakness of its frame.

The proposed new improved drainage – mole implements, has high productivity, high machine utilization factor (MUF) and the extreme working bodies which made with inclined racks to save from collapsing from above the shells of mole drainage. It has a working width of up to 4 m, the frame consists of three parts, the middle frame is hung on a tractor with three point connections, U-shaped frames with a wide grip of up to 1 m are put on the middle frames on both sides, and between the working body there is a side and average of 2 m, and you can reduce their distance to 2 m. The depth of mole drainage formation is selected depending on the dependence of the mechanical compositions and the degree of soil salinity. The working bodies for the formation of mole drainages, the cone cylinder has a diameter of 0.105-0.110 m, the height of the stand is 1.0-1.2 m, the length of the steel cable is 0.30-0.35 m connecting the posts with the cone of the cylinder, the working width is wave-shaped bit 0,055-0,080 m, the angle of installation of the working body 27-300 and the speed of the unit 1.24-1.36 m / s with this parameter provides high-quality process execution. When using a drainage mole gun in highly saline soil, harmful salts from the soil are reduced by 5-6 times, the desalinization coefficient is 7.4 and this tool can be used after 2-3 years.

It is clear, in many countries of the world, including Iran, Pakistan, Turkey, 50%, India, the Arab Republic of Egypt, 25-30%, Russia 12 million hectares, Pakistan 6 million hectares, in Uzbekistan - 2 million hectares of land have saline soils and is considered a global problem for their improvement. In the world, highly saline lands lead to a decrease in agricultural products by 44-46% [1]. To improve the reclamation state of highly saline land, various methods and technologies are used, including the use of collector drainage, tillage using various technologies and technical means and other methods. To these degrees, by these methods, it is possible to reduce harmful salts from the soil. And the use of a drainage mole with which with the lowest energy consumption can achieve high results.

In one size trend pressure is P potential function

(if it has) is the function of only one coordinate. The procedure of 2 part seeping liquid submits in the law of seeping lesson. This procedure simplified differential equation of action, in other words it makes possibility to express it.

Figure. 1. Scheme of the flowing pipe in condition of filtration

So we can count mass of the flown water 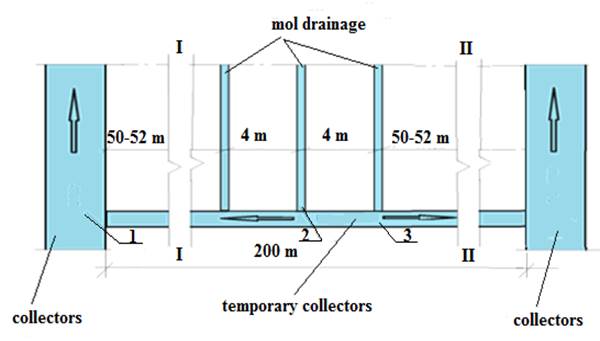 In the course of the study, modern methods and devices were used to measure traction resistance of the working bodies, study of soil salinity and methods for their determination.

The improved mole drainage gun differs with existing guns in that, the new gun has three working bodies which are staggered on a two-row gun frame with a working width of up to 4 m. And it consists of the following units, parts and elements. The improvement of the drainage and mole implements works as following: with the help of a linkage 1, the middle frame is hung on the rear linkages of the tractor, while the lateral U-shaped frames 2 are fixed to the middle frames 1, going inside 0.5 m and fastened with bolts 12, and you can reduce or increase the distance between the racks lateral 5 and middle 6. During the operation of the gun using the support ring 7, you can adjust the depth of formation of mole drainages and is set depending on the mechanical composition and salinity of the soil from 0.6 to 1.0 m.

First in Uzbekistan, under irrigated conditions in saline soils, with the justified parameters of the working bodies of the tool, the tools we developed were used. The tools were tested in laboratory and field conditions to justify the parameters of the tools and obtained positive results to reduce harmful salts from the soil in irrigated agriculture, and developed by improving tools with optimal parameters [3-5].In the areas of cotton production, they are designed to form artificial mole drains in a row spacing of 22-25 cm for irrigation to water.

The proposed tools were tested in laboratory and field conditions and received positive results.

Figure 3. The process of groundwater flow in mole drainage

The experiments were carried out with drainage worm tools in the soil channel in a laboratory conditions and field conditions studied the formation of worm drainages, and the study of the general traction resistance of the working bodies of the tool.

We determine the general traction resistance of the advanced working bodies of the drainage mole gun in the following formulas [7].

- soil resistance for cutting with a wedge-shaped rack, kN;

- resistance to soil sticking on the surface of the cylinder cone, kN;

- the resistance of the workers from sticking soil in the side, kN;

- resistance of a rack of workers, kN;

- resistance of the support ring, kN;

After that, we determine the general dressed state during the formation of mole drainage in a certain depth (60, 70, 80 cm) of soil.

- the general stress state during the operation of the working bodies of the cylinder cone, MPa;

- the shell width of the molded mole drainage in a certain depth (N) of soil cultivation, m;

Using equation (5), the general stress state was calculated during the work of the proposed tools in the range of

- Power of a drainage machine, kW;

- the speed of the mole drainage machine, m/s;

The annual operational productivity of the mole-mounted drainage machine

(km / h) is determined by the following formula:

Tf.chas -Hourly operating hours of the machine in the year set by the annual

The working, process the proposed tool before spring washing with washing norms and washing options are shown in table 1, as well as the norms and terms are given in the column below. The experiments were carried out in 3 variants. 1-option conventional plowing to a depth of 0.35 m; 2-option plowing in depth 0.35 m and optionally loosening with a chisel cultivator and a 3-plowing option to a depth of 0.35 m and additionally the formation of mole drainage to a depth of 0.6 m with a mole drainage implement (table 1). The salt content was determined before washing on 18 ha. The experimental field was averaging 0.978% and the washing field was a decrease in salt and an increase in desalination coefficient.

The results of a study of 18 ha of experimental poly

According to the table 1 it can be seen that the most optimal option for reducing salt and increasing the stratification coefficient was obtained in the third option, recommended by a drainage mole gun. Salinity is 0.978%.

Doctoral student of the Bukhara branch of the Tashkent Institute of Irrigation and Agricultural Mechanization Engineers, Uzbekistan, Bukhara