Based on the mechanism of Radical polymerization involving redox initiators, polymers with a relatively high molecular weight were synthesized by adding a small amount of Bombyx Mori chitosan to a dilute acrylamide solution. It is proved that during the synthesis, the absorption lines in the UV spectrum change due to the formation of a complex between chitosan and acrylamide.

So far, several positive results have been achieved in expanding the practical application of polyacrylamide (PAA). For this purpose, PAA with a sufficiently high molecular weight (M≥106) was synthesized in the world's leading research centers, mainly using concentrated solutions of pure acrylamide (AA) monomer in the synthesis process [1-3]. The synthesized high-molecular-weight cationic, anionic and nonionic PAA and its copolymers are effectively used in various industries and sectors [4-6].

For many years in the JSC “Navoiyazot”, an aqueous solution of AA monomer has been produced industrially based on the ammonia technique and this solution is used for producing PAA gel. Due to the low water solubility of this polyacrylamide gel, the leading industrial enterprises of our country use imported polyacrylamides based on imports from abroad (Germany, China, Russia). Therefore, our goal is to synthesize high-molecular-weight PAA, which is highly soluble in water, using an aqueous solution of AA available at JSC "Navoiyazot" as a raw material. To this end, it is important to note that in recent years, in addition to acrylamide monomers, the synthesis process has focused on the synthesis of polymers using natural polymers (starch, lignin, and chitosan) [7-9].

An aqueous solution of acrylamide (10-12%) produced by JSC "Navoiyazot" on an industrial scale, obtained by the method of ammonia with a density d = 1,16 g/cm3, pH = 7-8, in the Academy of Sciences of the Republic of Uzbekistan Institute of Polymer Chemistry and Physics Bombyx Mori chitosan (CS) with a molecular weight of 110000 and a deacetylation degree of 82%, using a modification of chitin isolated from silkworm fungi, was used. Synthesis of polymers was carried out in a three-mouth flask equipped with a stirrer by a radical mechanism, in the presence of oxidizing-reducing initiators of potassium persulfate (PS) and sodium pyrosulfite (SP) in an inert nitrogen medium at the temperature of 20-40ºC for up to 6 hours. For the use of CS in the reaction system, its solution in dilute acid at a concentration of 0.08-0.2% was used. The resulting thick solution of the polymer was diluted in an acetone-alcohol solvent system and dried under a vacuum until the precipitate reached a constant mass.

The polymer yield obtained by the reaction was determined by the gravimetric method and the intrinsic viscosity of the solutions was determined on a Ubbelohde viscometer at a temperature of 30ºC in 1N aqueous solution of NaNO3 [10].

The process of complex formation of CS and PAA in the formation of PAA was photographed on a spectrophotometer Specord 210 with UV spectra of polyacrylamide in the range from 190 to 250 nm.

For this, dilute solutions of the polymer were used. Initially, the molecular-mass properties of PAA were synthesized based on radical polymerization reactions, after the synthesis process, linear structural polymers were synthesized to a high degree of conversion. It should be noted that as a result, the yield is found to be higher than 80%, because the higher the yield, the lower the consumption of raw materials used in the production process. It is also important to maintain the high water solubility of the polymer, which is formed from the participation of CS in the polymerization process, albeit in small amounts, usually insoluble in water (Table).

As mentioned above, although the synthesis of polyacrylamide was carried out in the temperature range of 20-40ºC, at different concentrations of monomer initiators, the table shows the results determined mainly based on conduction at a temperature of 30ºC. The results from the table show that the addition of a small amount of CS to the reaction system has a significant effect on the molecular weight of the PAA formed. This is determined by the increase in the reaction rate of the process due to the addition of CS to the reaction system. To further analyze the changes in the characteristic viscosity and molecular mass of the polymer as a result of the addition of chitosan to the reaction system during the synthesis of polyacrylamide, UV-spectroscopic analysis was performed. The results of UV spectroscopic analysis are given below (Fig. 1). 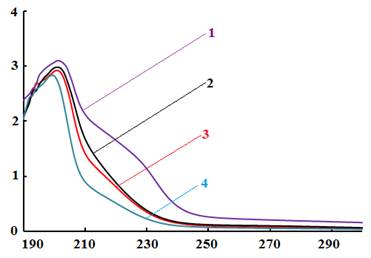 The increase in the polymerization rate and molecular mass of PAA in the presence of CS cannot be explained by a change in the initial viscosity of the reaction mixture due to the small solubility of CS, which may be due to the uneven concentration of the monomer. In the absence of chitosan in the system during synthesis, the AA molecules are evenly distributed throughout the reaction mixture.

The presence of heterogeneity of concentration in the presence of CS leads to a higher rate of polymerization in areas with high concentrations of AA formed near chitosan macromolecules than in AA molecules in solution. This effect should lead to an increase in the molecular mass of the polymer.

In the UV spectrum of polymers in the wavelength range of 190-230 nm are observed absorption lines associated with π-π* electron transfer, as well as the increase in the number of bonds in the chain of macromolecules in the long-wavelength region side redshift occurs. The presence of absorption lines at a wavelength of 240-290 nm is associated with π-π* electron migration of undivided electron pairs in nitrogen and oxygen atoms (curves 1 and 2 in the figure). From the spectra of the copolymer formed by the welding of polyacrylamide to chitosan, it can be seen that π-π* and n- π* differ in two directions depending on the conjugation bond C = O and the intensity of the unpaired electron pairs of the nitrogen and oxygen atoms. It depends on the rules of the selection of electronic transitions.

UV-spectroscopic studies have shown that welding of PAA to chitosan results in shifting and widening of the absorption lines toward the long-wavelength region, a phenomenon that is associated with the presence of a cross-linking chain. Due to the bonds, the energy of the undivided electron pairs of the oxygen atom in the carbonyl group is reduced, as there is a decrease in the n – π* transition energy in the relaxing molecular orbitals, which leads to a shift towards the long-wavelength region (Figures 3, 4- curves).

During the radical polymerization of acrylamide in the reaction mixture, it was found that high molecular weight polymers can be obtained by adding a small amount of Bombyx mori chitosan. This indicates that in the future this process can be used in the production of high molecular weight water-soluble polyacrylamide, which can be used as a nonionic flocculant in the treatment of wastewater used in the manufacturing industry.