This article describes the development of new types of liquid nitrogen fertilizers containing some derivatives of ferrocene, their use, importance in agriculture, as well as spectral analysis.

Such fertilizers are not harmful in the fall and are convenient to mix them with micronutrients, plant protection products, morphoregulators and other biologically active substances (except liquid ammonia) [4,5]. In the production of liquid nitrogen fertilizers, energy demand is reduced due to drying, granulation and packaging processes, resulting in a reduction in the duration of the production process and labor, energy savings [6]. Therefore, the demand for liquid nitrogen fertilizers is growing from year to year.

The use of fertilizers containing trace elements (Mn, Zn, Fe, B, Cu, Co, etc.) significantly improves the yield and quality of agricultural products. Of the trace elements, iron is the most important. Iron deficiency causes chlorosis in plants. The use of iron-containing micronutrients is important in the prevention and elimination of this disease. At the same time, the use of micronutrients in combination with basic fertilizers increases nitrogen uptake by 5-9 % and phosphorus uptake by 4-5 %, which increases the yield of cotton from 2,5 to 7,0 ts / ha [7,8] .

Based on the above data, we aimed to develop liquid nitrogen fertilizers containing ferrocene and to test them in practice. It is known from the literature that a number of derivatives of iron-containing ferrocene have been recognized as biologically active substances [9,10]. Therefore, it is important to synthesize its water-soluble products, to study their positive effects on liquid growth and development of plants in combination with liquid nitrogen fertilizers, disease control and increase productivity.

Equipped with an agitator, dropper funnel and thermometer, a 3-necked 500 ml volumetric flask was filled with 150 ml of water, 1,35 g of monomethyl urea and 11,5 ml of concentrated hydrochloric acid with 100 g of ice cubes. The flask is stirred vigorously at -2 oC. A solution of 15 g of sodium nitrite in 40 ml of water was added dropwise through an infusion funnel for one hour. At the end of the drip, 1 g of urea dissolved in 5 ml of water and 2 g of sodium acetate solution dissolved in 10 ml of water were added to the reaction mixture to decompose the excess HNO3. The ice bath was then replaced with a water bath. 0,75 g of m-ferrocenylbenzoy dissolved in 100 ml of diethyl ether was added to the reaction mixture. The drip funnel was replaced with a return cooler. The mixture is heated for 3,5 hours at 34-36 oC while stirring. At the end of the reaction, the mixture was taken to a separating funnel and the aqueous and etheric layers were separated. The aqueous layer was extracted 3 times with diethyl ether. The ethereal layers were added and washed 2 times with water. Ether layers were added and extracted several times with 2 % sodium hydroxide solution. The resulting aqueous extract was neutralized with a 5 % hydrochloric acid solution. The yield of the product is -0,5 g (52 % relative to m-ferrocenylbenzoic acid) T.s. = 153-154 oС

The mixture formed as a result of reactions of m-ferrocenylbenzoic acid with monomethylolochevina was separated from each other by column chromatography. The yield of synthesized 1 '- (3-carboxyphenyl) -1-N-methyloxyperrocenylamide was 52 %. The reaction scheme is as follows:

To carry out the synthesis, 365 mg (0,001 mol) of 1 '- (3-carboxyphenyl) -1-N-methyloxyperrocenylamide is obtained and dissolved in 20 ml of diethyl ether. The solution is poured into a separating funnel and a solution of 69 mg of K2СO3 in 10 ml of water is added to it. The aqueous layer is separated and the water evaporates. This resulted in the formation of the potassium salt of 1- (3-carboxyphenyl) -1-N-methyloxyferrocenylamide.

1 '- (3-carboxyphenyl) -1-N-methyloxyperrocenylamide was obtained by its action in an aqueous solution of K2СO3 to obtain its potassium salt. The reaction scheme is as follows:

We have tentatively named this substance Ferben-potassium.

Determination of the structure of the synthesized Ferben-potassium substance was performed by IR spectroscopy method. When studying the analysis of IR-spectra of the compound, the relatively low peaks at 750 cm-1 in the IR spectrum and the relatively low peaks at 1000 cm-1 were blown along the plane of the peak ring at 1412 cm-1, strong at 687 cm-1 and 1000 cm-1. The weak absorption peaks at 1 correspond to the deformation of the ring, the intensity at 1687 cm-1 corresponds to the valence vibrations of the carbon in the strong ring. The area of ​​weak intensity represents the oscillation of the cyclopentadienyl ring. In cyclopetadienyl exchange rings are observed in the areas of 850 cm-1, 1267 cm-1, 1300 cm-1 and 1412 cm-1. The intensity of the valence oscillations of carbon atoms in the unchanged rings is moderate and is manifested in the area of ​​1100 cm-1. It can be observed that the vibration of the carboxyl group gives peaks in the area of ​​1550 cm-1. The -OH group valence oscillation forms a wide absorption line in the area of ​​ 3400 cm-1. 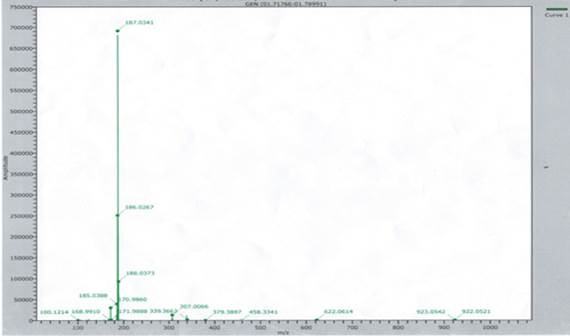 Given that high efficiency can be achieved when liquid nitrogen fertilizers are applied in combination with micronutrients, plant protection products, morphoregulators and other biologically active substances, the synthesized biologically active compounds were added to KAS fertilizer. Experiments The impact of a number of farms in the Republic of Uzbekistan on the growth and development of crops and increase productivity in cotton and wheat fields in 2020 was studied.

Conclusion. Experiments have shown that cotton and wheat have better retention of yield elements than control when applying a new Ferben-potassium nitrogen liquid fertilizer during the application period. As a result, it was found that the yield of cotton increased by 5 - 6 ts / ha, wheat - by 10 - 16 ts / ha, and as a result, high economic efficiency was achieved.

Senior lecturer of the Department of Chemistry of Andijan State University, Republic of Uzbekistan, Andizhan region