This article discusses the existing problems that arise when uncoupling on sorting yards. New methods aimed at increasing the throughput of an automated sorting yard control system during one-day sorting operations, as well as requirements for the technology of operating a sorting yard using cuts and reducing the number of switches, have been studied. By analysing the systems comparatively, the most optimal system was selected based on the number of one-day sorting operations, and the sorting capacity of the sorting hill was significantly increased.

In modern conditions, it is appropriate to consider the issue of construction of a combined hill structures on one or two roads for good and bad runners in the development of an automatic control system for throwing wagons in accordance with energy consumption requirements. 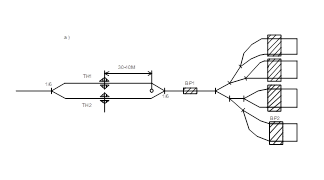 Based on the different characteristics of wagons, the method of designing “winter” and “summer” combined hills, which existed in the last century, will have to be radically modernized due to the development of automated continuous throwing technology.

At the current stage of the development of automation systems, combined hills not only reduce capital investments and the metal consumption system of the throwing system, but also allow to abandon the hill locomotives and switch to automatic pushers, which fundamentally rework the throwing technology [1]. A cross-section of a crest (Fig. 2) is shown as a combined peak complex consisting of parallel peaks of high and low power. More than 100 mechanized hills are being used on railways, 50% of which have been equipped with a three-wagon deceleration mechanism. In general, about 3,400 wagon decelerators are used to brake wagons on sorting hills, their operation is ensured by 442 compressor devices. Total annual expenses for their maintenance and repair are more than 1 billion soums.

Figure 2. Cross-section of the bend of the combined hill complex

The proposed complex of combined hills can offer a universal solution and can be used for various sorting systems with different numbers of descent and push paths. Figure 5 shows the existing and design profiles and plans of hills combined with earthworks for minor road network changes and small capacity hills. In all variants, car retarders are not available (or are set to be dismantled) in the second braking positions and are recommended in front of the couplings of the sorting park in the first braking position [2].

In summer conditions, the sorting of movements can be carried out by means of small power hills, and in winter conditions by both systems. In the summer, when the average temperature is normal and the road is windy, empty wagons pass the calculated sections on difficult roads at a speed of 3.5-4 m/s, and loaded wagons - at a maximum speed of 6.22 m/s and with braking calculated from the positions. EC modeling of the processes of pushing and lowering movements from hills allowed to determine the dynamics of good and bad runners in winter and summer conditions, their speed in the downhill and downhill parts of the sorting park, intervals between runners, point or target inspection of wagons in the park [3]. In most cases, for the winter conditions of the Republic of Uzbekistan, the height of the main sorting hills is 4.1–4.2m, when the temperature is close to -50C and the headwind (or from the side) is 7 m/s or more, which allows empty wagons to enter the sorting park freely. The height of a small power hill in such conditions is 2.5-3m. Loaded wagons enter the third braking position in free fall at a speed of 4.5–5 m/s, taking into account braking - at an allowed speed 1.4 m/s due to collision of wagons.

For summer conditions (low-power hill, air temperature +30°C, wind speed on the road 5-6 m/s), bad runners pass the determined points of the qualifying park at 40-50 m, good runners enter the third braking position at a speed of  up to 6 m/s [4]. It should be noted that in the implementation of a complex of combined hills and two parallel push tracks for pushing and distributing wagons, there may be some delays in the separation of trains and pushing to the main hill. In this case, the processing capacity of the system may decrease by 1-2%. In order to overcome these shortcomings, it is proposed to use an electric puller to push the empty wagons from the dividing arrow to the top. It is a remote-controlled additional self-propelled shunting device designed to move wagons by placing powerful and electromechanical devices on a two-axle bogie frame [5]. For example, consider one of the Khovos sorting stations of “Uzbekistan Railways” JSC - a two-way sorting station with parks arranged in a row. Sorting systems (Southern and Northern) have high-powered hills with three brake positions. The analysis of the work of sorting systems of the station shows that 90-95% of the volume of loaded wagons processed in the Southern direction and 25-30% in the Northern direction. The average daily processing of one hill is from 700 to 8000 wagons. The annual cost of maintenance and repair of compressor devices, wagon retarders, arrow switches, for one northern system, with three connecting sorting roads and three braking positions, is 90-100 million soums, of which 31% is spent on electricity. the height of the hill of the northern sorting system of the sorting station is equal to 3.54 m, 70% of processed wagons are empty, they do not need retarders in the first two positions, 30% of wagons are loaded, for which one section of the sorting park is given. The second option for the distribution of wagon flows into "empty - loaded" can be at the points of separation in front of the hill in the drop and push sections with a slope of 10-15%. A symmetric 1/6 arrow type is laid on the 50 m long descent section, which allows to observe the peak interval with a speed of 1.4 m/s between the cuts within 9-10 [1].

When placing wagons according to the pattern of “bad-good-bad” (B-G-B), empty wagons are “moved” to the main hill, and also loaded ones are moved into the additional hill. It is implied to use hill locomotives for further advancement of empty wagons on the hill. As can be seen from Figure 4, out of the eight overhead car decelerators operating with the existing technology, only two are required in the design option - for the third link roads. Park retarders will be maintained on all roads. When the share of loaded wagons in the streams increases and they double or more, the sorting park is modernized to a single system due to the laying of a crossing line instead of the first dividing arrow [6].

Figure 5. Options for improving the double-sorting system of the sorting station: a- medium-capacity hill design with a single push-way; b-the project of the combined hill complex

At the same time, it is necessary to carry out the following works: construction of the superstructure and road elevation for the ground sheet with the laying of rails, sleepers and cross-sections; placement and installation of automatic centering field devices on the hill; re-equipment of the remote control that controls the throwing of movements at the hill post; equipping the hill with an additional sorting device in the push part. The design height of the medium-power hill is 3.6 m, equipped with two braking positions (TP) in the descent part and a third TP on the park roads in the descent part (Fig. 5, a), this situation significantly improves the performance of the station and increases the processing capacity of the station in a double system by 3 times. In the second option (Fig. 5, b), it is proposed to design a second hill on a solid slope parallel to the medium-strength design hill (low-strength, 2.5 m high). A 50-m-long drop section with a 1/6 symmetrical arrow type is laid, which provides a peak interval between the crossings when moving at a speed of 1.4 m/s.

In conclusion, it should be noted that in the new construction of the sorting stations with a complex of combined hills, the costs of use can be reduced by 35-40% due to the absence of wagon decelerators in the second braking positions, the reduction of costs for the repair and maintenance of compressor devices and the use of new technologies for dispersing wagons.