This article analyzes the working parts of the fibre cleaning machine used in yarn-spinning enterprises. In order to determine the number of spinnable fibres in the fibrous waste, the fibres were cleaned using a new perforated surface. The number of fibres suitable for spinning in the separated fibre waste and their properties is described. According to the results of the experiments conducted under production conditions, the conclusions are given on the situation where the amount of spinnable fibres in the fibrous waste has reached the minimum index in relation to the total mass.

Today, the textile industry of our country stands out not only as a rapidly developing sector, but also as a sector that steadily increases exports, attracts foreign investments, modernizes production processes, and undergoes radical technical-technological renewal. The light industry, including the textile industry, is a strategically important and rapidly developing branch of the national economy. One of the main tasks facing the light industry is the production of textile fabrics and their delivery to the finished product, the introduction of new techniques and technologies, and the comprehensive solution to the issues of using local raw materials [1,2,3].

In recent years, comprehensive measures have been implemented in the Republic to develop the textile, sewing-knitting, leather-shoe and fur sectors of the light industry, to expand the types and assortment of manufactured products, as well as to comprehensively support the investment and export activities of the branch enterprises. The measures taken made it possible to create capacities for processing more than 80 per cent of cotton fibre and more than 45% of cotton yarn produced in the Republic, as well as to increase the export volume of finished products to 2.0 billion US dollars in 2020 [2].

As a result of the conducted research, it was determined that the use of Truetzschler carding machines is appropriate because the amount of fibres suitable for spinning in the carding is the least, the product output is higher than other types of carding machines, and it was found that the quality of the comb fully meets the standard requirements [5].

In the research conducted by the authors [6,7], reduction of the number of impurities and foreign bodies in the raw material was achieved by about 50%, that is, 13 impurities in the sorting were 8 after purification. It is concluded that this leads to improvement of the quality yarn spinning process. From the conclusions of the conducted research, it was stated that the cleaning-cleaning and combing machines produced by the company "Truetzschler" are more effective compared to the machines recommended by other companies [8].

To prevent the inclusion of spinnable fibres in the waste, a perforated surface of a new shape was used instead of the colossal grid. It is known that in the process of cleaning covered with a sawtooth coating, it is possible to separate the incoming fibre product into small bundles and separate fibres as much as possible. As a result, the ability to clean various debris and foreign bodies from the fibre product is improved. Because the forces of friction and interaction between the fibres in the product are sharply reduced.

The CL-C3 cleaning machine of the German company "Truetzschler" was used as a basis for conducting scientific research experiments. This machine consists of three drums, and the whole drum surface is equipped with a saw-tooth coating. Based on the operation of these machines, a single-drum device with a sawtooth coating was prepared. The prepared device was equipped with a perforated surface and tested. Samples for the experiment were taken from the "Kosonsoy cotton ginning plant" in the Kosonsoy district and "Namangan textile" LLC enterprise located in Namangan city. The enterprise produces yarns with a linear density of 20 tex from 4-type 1 cotton fibres of the selection variety Namangan-34 and their mixtures. Samples were taken from the machines (sorted, rate, grinding, mixing) in the grinding-cleaning unit available at the enterprise. The CL-C3 cleaning machine of the German company "Truetzshler" was used as a basis for scientific research [9].

This machine consists of three drums, and the whole drum surface is equipped with a saw-tooth coating. Although this machine has a good cleaning performance, the saw teeth on the drum surface can damage the fibres that are suitable for spinning and cutting the damaged fibres, increasing the proportion of short fibres. This, in turn, causes an increase in short fibres and fluff. Defects in the fibre are cleaned with the help of a separating knife and an opening and closing barrier located under the drums. In the recommended device, instead of the dividing blade and the opening and closing barrier, a perforated grid (perforated) surface with a diameter of 6 mm, 9 mm and 12 mm was installed.

The length of short fibres was taken as the basis for choosing the diameter of such a perforation surface. Because fibres up to 12 mm in length are considered short fibres and fluff. If the holes in the perforated surface are larger than 12 mm in diameter, the probability of spinning fibres falling into the waste chamber increases. If the diameter of the holes on the perforated surface is less than 6 mm, the number of short fibres in the cleaned fibres may increase, that is, it will be difficult to separate the short fibres in the product during the cleaning process. The difference between the recommended perforated surface and the colossal grids of cleaning machines used in modern plants is that the incoming fibres, even if they remain transverse, have a very low probability of falling into the waste chamber. The sample of the cotton ginning plant, the sample of the yarn spinning enterprise and the properties of the samples passed through the recommended device are the results of testing in the HVI-900 SA (High Volume Instruments - Uster HVI 900 SA tm. USDA) model laboratory system available at the "Sifat" scientific centre located in the city of Namangan. was obtained [10]. 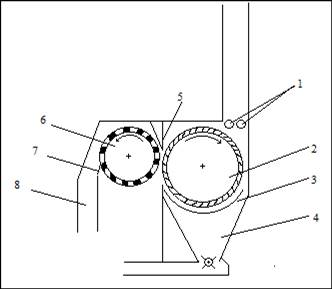 The obtained results are shown in table 1 below.

Results of laboratory testing of the properties of the recommended samples

Using the obtained results, we will consider the interrelationship of some fiber parameters. As can be seen from the table above, although the parameters of the fiber in the product such as micronaire (Mic), relative strength (Str), fiber length (Len) and uniformity index (Unf) have not changed much, the amount of short fibers in the product (SFI) in the recommended option compared to other options ) can be seen to be reduced by 22-28%. The relative strength of the fiber and the elongation at break are evaluated by the strength of one of the main indicators that determine the quality of the manufactured finished product, that is, the yarn. The graph below shows the relationship between the relative strength of a fiber and its elongation at break. 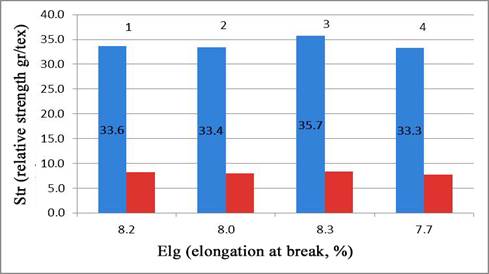 Figure 2. Graph of the relationship between the relative strength (Str) and the elongation at break (Elg) of the fiber

From the graph above, it can be seen that the relative strength of the fibers obtained from the cleaning machine of variant 1 is 6% higher than that of variants 2 and 3. That is, it increased from 33.4 gr/tex to 35.7 gr/tex. Because in the recommended option, after the cleaning process, the percentage of short fibers in the product is reduced. This directly affects the quality of yarn spun from this raw material. It is known that the lower the proportion of short fibers in raw materials, the more thorough and high-quality the yarn being spun from it. 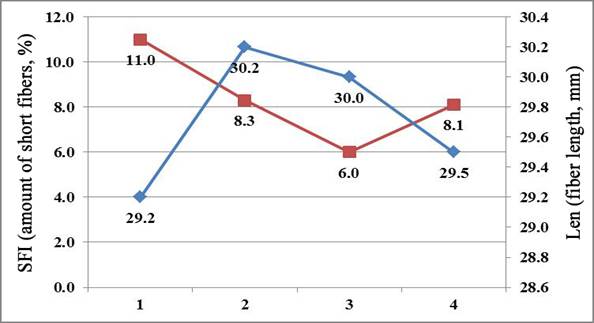 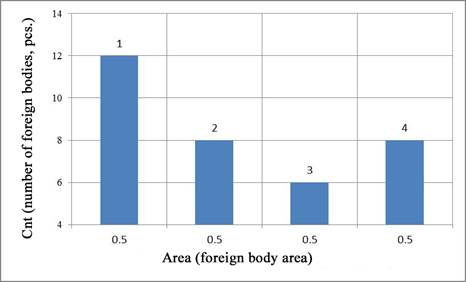 Based on the conducted experiments, the use of a perforated surface of a new design has resulted in a reduction of the amount of spinable fibers in the fibrous waste released from the cleaning machine. It was achieved that the percentage of spinnable fibers in the fiber waste produced by the newly constructed perforated surface cleaning machine does not exceed 10.0–12.5 percent.

Doctor of Technical Sciences (PhD), Assistant of the Department of Technology of Textile Industry Products, Namangan Institute of Engineering and Technology, Republic of Uzbekistan, Namangan