Universum: технические науки Архив выпусков журнала "Технические науки" 2022 9(102) EVALUATION OF THE INFLUENCE OF THE PHYSICAL PROPERTIES OF BOUND SOILS ON THE WASHING PROCESS

On the basis of laboratory studies, the physical properties of the studied soils for erosion were established. The resistance of these soil properties is shown with the eroding ability of the water flow. A relationship has been established between the eroding flow rates and the intensity of erosion of cohesive soils.

As we know, the research of soil connected in hydrotechnical structures and underground canals has its own characteristics. Soils are used as building materials for foundations, structures and canals. In order to ensure the durability and safety of hydraulic structures, it is important to evaluate the strength and deformation indicators of the soils used, as well as their leaching indicators. Therefore, in order to determine soil leaching, together with the study of flow kinematic factors, it is necessary to carry out laboratory studies on establishing their physical and mechanical parameters [4].

In this work, it was aimed to establish the physico-mechanical properties of soil samples taken to determine the rate of leaching of bound soil and to use them in the future.

In order to evaluate the washing of bound soils under the influence of flow in the channel model, the bound soils with broken structure were prepared in iron boxes in laboratory conditions and they were designated in the following order: 1- light sand from the natural channel; 2- medium sandy soil; 3- light large sandy soil; 4- light sandy soil; 5- light sandy soil; 6-heavy dusty sandy soil. Also, the 6th light kumoq (lyog.suglinok) soil was brought from the "Dostlik" canal in Kashkadarya region, where field experiments were conducted. In the following, these primers are briefly referred to as primer 1, primer 2, etc. we call it.

After conducting experiments on the speed of soil washing by the flow, samples of each soil were taken and experiments were conducted to establish their physical properties.

In order to establish the physical properties of the soil samples prepared for the study of leaching of bonded soils under the influence of stream flow, we We conducted experiments in the laboratory of "UzGAShKLITI" LLC (State Project-Research Institute of Construction, Geoinformatics and Urban Planning Cadastre) . Table 1 lists the physical and mechanical parameters of the bonded soil samples used in the experiments.

In this work, we look at the physical properties of bonded soils established in laboratory experiments, which directly affect the process of channel washing.

From the analysis of the established physical properties of the soil used in the experiment, it can be noted that until now, the physical properties of the soil are considered to be the main factors in the processes of washing in the connected channels, and no general laws have been found that connect them with the flow parameters. The properties of bonded soils established in this work correspond to the limits of the range of experiments conducted to study the washing process in channels.

From the analysis of the established physical properties of the soil used in the experiment, it can be noted that until now, the physical properties of the soil are considered to be the main factors in the processes of washing in the connected channels, and no general laws have been found that connect them with the flow parameters. The properties of bonded soils established in this work correspond to the limits of the range of experiments conducted to study the washing process in channels.

When the bound soil pore medium is completely filled with water, the friction between the soil particles is greatly reduced and the volume also increases. In this case, the films of water under the influence of the mutual molecular attraction of the connected soil particles smooth out the roughness of the individual aggregate particles. Therefore, friction in wet clay soils is very low.

In the experiments, there was no obvious relationship between the porosity coefficient values obtained for the soil samples in relation to the washing rate of the stream. But from the experiments conducted on setting the washing rate of the flow, it was observed that with the decrease in the porosity of the bound soil, their resistance to washing increased. This factor was not taken into account when estimating the leaching rate of the stream because no clear functional relationship was obtained between these.

Most researchers believe that the plasticity of bound soils is manifested only when there are water shells (veils) of a certain thickness around the particles. In this case, during the wetting of clay particles with water, loosening of connections between particles, due to the strong development of diffusion shells on the surface of the particles causes bulging of the bonded soils and manifestation of crack movement by the particles. In such conditions, the particles move easily relative to each other under external influence.

The upper limit of soil plasticity is one of the indicators of bound soil, which determines the general understanding of the composition of clay particles in cracks and the level of hydrophilicity that makes up its minerals.

The amount and hydrophilicity of the clay particles determine the cohesive forces in the soil and subsequently leaching.

From the experiments, it was not possible to establish a functional dependence of the flow rate on the upper limit of soil plasticity.

From Table 1, as the plasticity of bound soils increases, their resistance to leaching increases.

Moisture content, or water saturation coefficient, relative humidity is an important characteristic that indicates the relative amount of gaseous phase in soil pores.

Since the maximum molecular moisture capacity depends on the surface (surface) of microstructural elements, it is possible to make an approximate opinion about the composition of soil microaggregates depending on its size. The maximum molecular moisture content (in %) is greater than 24% for clays; for heavy sandy loams it is 24...16, for medium ones - 16...12, for light ones - 12...8, for heavy sandy loams - 8...5, for light loams and sand - less than 5 does.

Another feature of Grunt is its squeak. Shrinkage is the reduction of soil volume during construction. In the plastic state of bound soils, aqueous-colloidal membranes are much stronger and particles can easily move (migrate) relative to each other. Evaporation of moisture during contraction is accompanied by an increase in surface tension forces and the approximation of particles, where intermolecular forces are significantly manifested. Shrinkage continues until the soil changes from a two-phase system to a three-phase system, and its upper layer dries to a hygroscopic moisture state.

Shrinkage events are often accompanied by the formation of cracks, which reduce the stiffness of the soil in the massif. Montmorillonite clays have the maximum shrinkage, while hydromica, polymineral and kaolinite clays shrink significantly less. The smaller the amount of clay-colloidal (clay-colloid) particles, the greater the shrinkage.

Intensity of channel washing was observed in periodically operated channels compared to continuously operated channels. The main reason for this will depend on the moisture content of the bonded soil. In continuously operating ducts, humidity is high, while in intermittent ducts, moisture is almost absent when the duct is not in operation, and cracks appear in the duct. Due to the lack of moisture in the cracks due to the impact of water on the soil, there are no cohesive forces and it causes the soil to wash out. This situation was observed on the periodical "Dostlik" channel. At the end of the irrigation season, the canal was washed so much that, as a result, they reduced the possibility of supplying water to the irrigated area.

Field and laboratory experiments were conducted to study the effect of specific humidity on channel washing. For this, research was conducted on the "Dostlik" channel located in the Kashkadarya region. Physical parameters of the soils obtained from the laboratory samples and from the channel are included in Table 1.

We used the first sample of canal connected soil and laboratory soil to study the dependence of channel washing rate on soil moisture. The soil brought from the canal at 5-10%, 16-20%, 28-35% and 39-50% moisture, and the soil from the laboratory at 7-10%, 13-22%, 28-35% and 41-53% moisture in the canal model research was carried out to establish their washout rates. Experimental data are included in Table 3.

Dependence of soil moisture on the rate of flow washing

. Deformation rates were determined for the studied bonded soils with different moisture content. The results of the experiment are included in Table 3, and a

connection graph was constructed according to them (Figure 1). 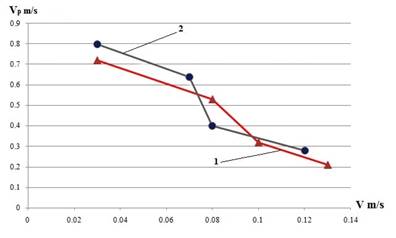 Figure 1. The graph of the dependence of the intensity of soil washing on the washing speed

From the comparison of these obtained results, it can be seen that soils with greater values of natural moisture, compared to soils in dry air conditions, are more able to withstand the washing rate of the flow (Figure 2).

As a result of the impact of the current on soils with a dry air condition, the pore medium layer is quickly occupied and the internal bonding between the particles is weakened. In addition, the compressed air bubbles weaken the interrelationship of the particles by causing a process of mechanical breakdown. When wet soils with maximum molecular moisture capacity are exposed to water, the soil is protected from various forms of deterioration because absorption occurs very slowly. It can be explained differently. If the bound soil moisture is greater than the maximum molecular moisture capacity, then depending on the moisture content, a certain number of capillaries (pores) will be filled with water, and water will enter only the unfilled capillary, and as a result, the possibility of its deterioration will decrease. 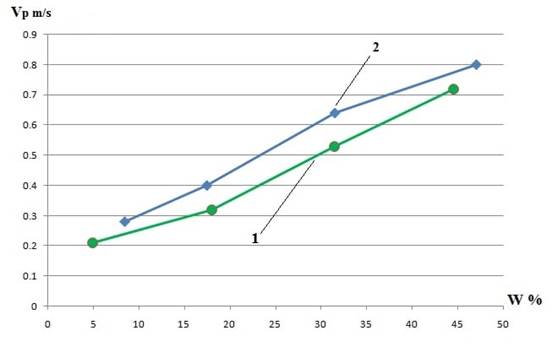