Universum: технические науки Архив выпусков журнала "Технические науки" 2022 9(102) TO THE SUBSTANTIATION OF THE OPTIMAL TIME OF THE TRAVEL AND TRAIN CONTROL MODE ON THE RAILWAY SECTION

The present research is a continuation of the work [1] and is devoted to substantiating the efficiency of the transportation work of locomotives by optimizing the running time and mode of driving a train in the real conditions of the organization of railway transportation.

Optimization calculations for a section (direction) include optimizing travel times for all hauls, taking into account the required throughput and choosing the final version of the optimal travel time and train driving mode at the minimum of annual reduced national economic costs.

The results of the calculations and the above recommendations to some extent contradict the well-known direction in the work of railway transport - the speedy delivery of goods. But this will be the case if we proceed from the payoff parameter B - delivery time. 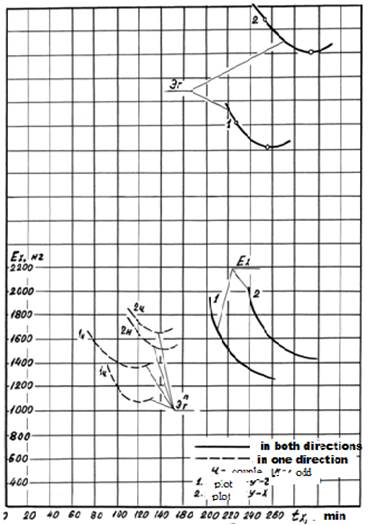 Figure 1. Changing the values of Eg, Egn and Ex depending on the mode of movement and the time of movement of the train on sections U - Ch and U – X

If, however, we take for the gain parameter B - a generalizing indicator - the annual reduced national economic costs Эг, then it will be appropriate to introduce optimal train travel times. Of course, the use of optimal train driving modes is very important in this case.

An example can be given - for passenger trains of the direction T - A with a diesel locomotive TE3, one section, for Q = 1000t and 10 pairs per day, according to the schedule standards, tг = 194 min., Fuel consumption at the same time Ег = 630 kg. The calculation of the value of the annual reduced national economic costs Эг for scheduling working conditions gave the value Эгг = 1126700 rubles in year.

The calculations carried out with the choice of the optimal travel time and train driving mode made it possible to obtain the total travel time of the train tх = 198 min., the consumption of full-scale diesel fuel by the diesel locomotive E = 598 kg and, accordingly, the value of Э*г = 1084400 rubles per year, that is, less by 3.8 percent.

In sections where there are sections that are difficult in terms of the track profile, taken according to the schedule of an excessively long travel time, it leads to a shift in the values of Эг on these sections "to the right" (see Fig. 1) from the optimal train travel time t*п, which confirms the need to identify optimal travel time by calculations with optimization.

These practices, as well as the examples given, show that, as a rule, the driving time of the course is taken for the traffic schedule somewhat longer than the time obtained by traction calculations according to the recommendations [2,3], which is associated with the desire to obtain a lower cost of transportation and ensure a certain reliability of performance. train schedule.

However, these changes in train times are made mainly on the basis of experience without appropriate feasibility studies.

The above methodology allows us to present economically feasible limits for changing the running times of a train for specific conditions that ensure the lowest transportation costs. It is possible to perform traction calculations in the Railway Administration using the most probable determining position nск_ for each stage with an average train weight Qp and an average number of axles mp in the train, which will bring their results closer to real conditions and optimal solutions.

When developing a train schedule, it is possible to set not a rigidly fixed time for the train to run along the hauls, but the limits of its change from the smallest value tпmin, obtained at the calculated position of the driver's controller, to the optimal train travel time t*п. Then the quality of the train schedule will not deteriorate and there will be no difficulties in laying train lines or reducing capacity, that is, the optimal or close to it train time should be used.

This will make it possible to obtain the greatest economic effect by providing a given volume of transportation with the work of locomotives. When scheduling trains, all possibilities should be used to bring the accepted traffic modes closer to their optimal values.

For example, let the estimated travel time of the train along the haul in an even direction is tпmin=12 min, and the optimal train travel time is t*п=16 min. When drawing up a timetable, an arriving train has a stop and must stand for 8 minutes waiting for an oncoming, odd train. In this case, it is advisable to take the travel time of an even train not as calculated, but as optimal, and significant money savings will be obtained without any damage to the quality of the train schedule. The parking time should already take not 8 minutes, but only 4 minutes, which will not cause difficulties in work. The presence of a possible fluctuation of the driving time ranging from the minimum tminр to the optimal t*р facilitates the construction of a traffic schedule and increases the efficiency of transportation work. It is desirable to carry out appropriate experimental calculations and practical verification of these proposals.

The traction calculations currently being carried out by the road authorities provide for the identification of the maximum carrying capacity of the sections, without reflecting the actual average conditions for the fulfillment of a given freight traffic. The actual organization of the transportation work of locomotives can be reflected in traction calculations, provided that they are carried out according to the average actual prevailing conditions for the transportation work of locomotives in the sections and taking into account the prospects for their improvement.

Carrying out calculations for Qp, mp, zp and ncк will allow taking into account specific opportunities for improving them due to the organization and technology of the transportation work of locomotives. It is necessary to separate the calculations related to the carrying capacity on the sections from the calculations related to the identification of the most profitable organization of the transportation work of locomotives, which will significantly increase its efficiency.

To illustrate the above, traction and energy calculations were carried out on one of the sections U-X of the Uzbek railway, the results of which are presented in table 2.

Indicators of the transportation work of diesel locomotives 2TE10M with different organization and technology of its implementation. L=127.1 km, Г=19 million net tons per year

As can be seen from these data, the first two work options are the most profitable, but at the same time they are practically impracticable. Run all the given freight traffic by trains weighing 3400 tons and 3200 tons is almost impossible.

In practice, this given cargo flow will be carried out by trains with an average weight of 2800 tons, which significantly reduces the efficiency of the transportation work of locomotives (option 3). But this practically possible variant of work can also be optimized by choosing the optimal Р*т and t*п and reduce the cost of funds to fulfill a given cargo flow by almost 6-7 percent.

All of the above confirms the need for calculations with the optimization of the process of transportation work of locomotives and in this regard, studies to study the possibilities of reducing the consumption of fuel and energy resources for train traction through the use of optimal modes of driving a train on sections of railways, including Uzbek ones, are timely and relevant.

These studies should be continued, taking into account the subsequent implementation of their results into the practice of the enterprises of the locomotive complex of railway transport, based on existing and newly developed mathematical methods of optimal control theory.