Universum: технические науки Архив выпусков журнала "Технические науки" 2022 9(102) THE INFLUENCE OF THE CAUSES OF FREIGHT TRAIN DELAYS ON THE SPEEDS OF TRAINS AT RAILWAY STATIONS

The level of railway indicators performance reflects the technology implementation degree of the transportation process and the operational work quality, the performance of train schedule indicators, the rolling stock efficiency and the capacity of railways. The time spent by trains on the section has a significant impact on the speed value– one of the most important quality indicators of railways. The article analyzes the delay causes in freight trains, which affect the speed of freight trains.

The main purpose of railway transport is to deliver cargo and passengers to their destination safely and on time [1-3]. An important role is played by the proper construction of the standard train movement schedule and the appropriate management of the daily schedule based on the standard schedule requirements.

Timely determination and elimination of the technical and technological condition of railway sections and the factors that have a negative effect on the speed of movement is important in ensuring the movement of trains at the specified speeds [2-4]. In particular, it is urgent to develop measures to eliminate the causes of cargo train delays.

The total running time of freight trains on railway sections depends on the length of locomotives movement, the operation duration of locomotive crews, the railway tracks condition of, the stations working technology, the types of trains (passenger, thermal, recovery, fire-fighting, etc.), the type of train (electric locomotive or electric locomotive), graphic type, etc. and ineffective time losses caused by random factors along the way have a significant impact [1, 4-7]. This, in turn, has a negative impact on the “Speed of Trains”, one of the most important indicators that determine the level of effective implementation of the railway transport work and the schedule of trains.

Adecrease in the “Speed of movement of trains” from the specified norm will cause delays in the arrival of goods and passengers to their destinations and will cause a decrease in the share of railway transport in the transport market. Therefore, improving accounting methods and analysis of inefficient time losses in railway sections is one of the urgent issues.

The process of train movement along the section is affected by a large number of negative factors that cause train delays on the hauls and associated unproductive time losses and, consequently, a decrease in the speed of movement [4-6]. To identify shortcomings caused by organizational reasons, deviations from the standards of technological processes, failures of technical means and commercial marriages on the roads, the schedule analysis of the completed movement of freight trains (SCMFT) is carried out.

Primary accounting for the implementation of the SCMFT is maintained by the DSC for the departure of trains from the stations of their formation, for the passage of transit trains through technical stations and for the passage of trains through dispatching sections. Each train delay must be reflected in the SCMFT with specific reasons for each service that caused it. DSC is responsible for the accuracy of this information.

The daily analysis of the SCMFT compiled by the DSC is carried out by the analysis engineers of the statistics service (“NC”) of the railway. Primary accounting data are reflected in the SCMFT analysis books form DU-26.

The investigation of the train delay causes is carried out by analyzer engineers of the ”NC” service together with subdivisions of the railway department (locomotive and car depots, power supply and contact network distances, tracks, signaling and communications, stations, etc.).

The results of the analysis are reviewed daily by the management of the services to which the train delays were attributed in order to take prompt measures to prevent the identified violations in the future.

Engineers-analyzers of the “NC” service, based on the departure data, passage and arrival of trains, as well as the time of train delays during the passage, indicating the guilty railway services, generate daily and monthly reports. In general, for the month, the statistics service compiles DO-12 (report on the implementation of the SCMFT form) [8]. For freight trains, the DO-12 form is compiled by summing up the data on dispatching sections.

The transportation service “D” of the railway uses the data of the form DO-2 to record and analyze the indicators of its work. Engineers of service “D” can specify them according to the SCMFT. The tables for calculating indicators are compiled by each engineer independently.

The service speed analysis engineer “D” compiles a daily table of economic losses from train-hours of train downtime for each section and the road as a whole (table 1) [8].

Based on the results of a decade or a month, summary tables of economic losses of train-hours of train downtime are compiled for services, directions, dispatch circles and the road as a whole.

According to [1-6, 9], traffic service includes delays due to:

As a result of the pivot table analysis, a series of data on the daily distribution of the number of delays and the time of train delays by month and the reasons for delays can be obtained in accordance with the notes on the traffic schedules for the department.

First of all, the number of trains on this section and technical and section speeds were analyzed (Fig. 1). 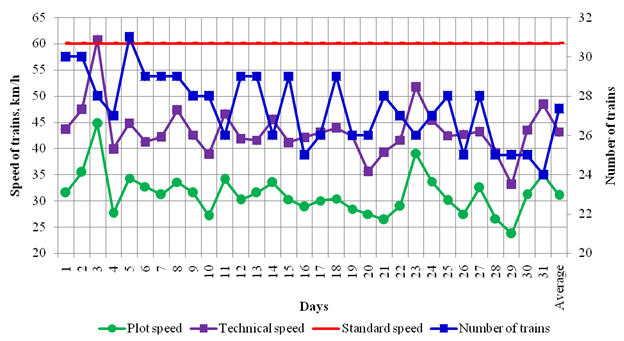 Figure 1. The dynamics of changes in the speed and number of freight trains on the “Uzbekistan-Khovost” section in December 2021

According to the analysis results (Fig. 1), all delays of freight trains can be divided into two groups, they are as follows:

Figure 2. Analysis of freight train delays influence of on the change in the average technical and sectional speed

During the study, it was found that the main reasons for the decrease in the value of the average speed relative to the planned one are:

1) non-reception of trains by stations and neighboring roads;

2) malfunctions of the rolling stock along the route and at the formation stations due to the unsatisfactory maintenance of the fleet of locomotives and wagons. In addition, according to the reporting materials on the performance of the speed on the section “Uzbekistan-Khavast”, the unsatisfactory maintenance of the fleet of train locomotives is the cause of 30-40% of speed loss of freight trains in the sections;

3) damage, malfunctioning of devices and infrastructure facilities. This entails train delays and the introduction of non-scheduled (not scheduled) warnings about lower train speeds.

The above reasons also do not allow to maintain the scheduled haul times and speeds of freight trains.