The tensosensitivity of deep levels of radiation defects (RD) and impurity atoms has been investigated by DLTS method. The high sensitivity  ( 100 - 150 meV/GPa) has been found for level of RD (Ec - 0,33 eV) to orientational deformation. The energy of ionization of the others levels investigated depends on pressure weakly. The tensosensitivity of levels of E- and K-centers is increases after annealing, but simmetry and ot­hers parametrs of centers do not change.

Introduction. Determination of the atomic state of an impurity or intrinsic defect that forms deep levels (DL) in the forbidden band is of great interest for the physics of local states in semiconductors. A decrease in the lattice symmetry under uniaxial deformation, in the presence of defects located asymmetrically in the lattice, can lead to anisotropic change in their parameters, which does not coincide with the anisotropy of the semiconductor, and to the splitting of multiply degenerate energy levels [2;4]. The symmetry of the defect can be determined from the results of measuring the shift in the energy position Ea of the DL and its splitting under uniaxial deformation.

Oriented deformation is used to study the optical, electrical and paramagnetic properties of semiconductors and local centers. In recent years, non-stationary capacitive spectroscopy - NCSDL - has found wide application for the study of centers with DL. This method has a high sensitivity and makes it possible to study low concentrations of DL centers, including non- paramagnetic centers and nonradiative recombination centers. However, the NCSDL method, combined with oriented deformation, has been used for the study of DL relatively recently [2]. In this work, the effect of pressure P on the properties of the A center in silicon was measured. The effect of uniaxial deformation on the parameters of other DL in silicon has been relatively poorly studied. The dependence of Ea on the value of hydrostatic pressure has been studied in more detail. Table 1 shows the literature data on the results of measuring the average coefficient of tensosensitivity

The aim of this work was a preliminary study of the influence of oriented deformation on the parameters of DLs formed by radiation defects (RD) and impurity atoms in silicon.

Samples and methods of measurement. For the preparation of samples, silicon of the SEP-5 and SHB-10 grades with a resistivity

and 10 Ohm.cm, respectively, was used. NCSDL measurements carried out with the help of deposited Schottky barriers showed that in the initial silicon the total concentration of DL did not exceed ⁓1011cm-3 (Fig. 1, curve 1)

Silicon alloying with metals was carried out by diffusion at temperatures of 1000 - 1200 ° C for 4-8 hours, followed by rapid cooling (quenching). Before diffusion, the crystal surface was thoroughly cleaned [6]. After diffusion, a 50 - 100 μm thick layer with a high diffusant content was removed from the surface of the samples and the plates were cut into samples with dimensions of 1x1x6 or 1.5 x 1.5 x 6 mm3 .

Samples for studying the RD had the same dimensions and orientation. Both Schottky barriers and diffusion p ~ n junctions were used as rectifying contacts. Si was irradiated with γ-quanta of the 60Co isotope at 300 K and a source intensity of 3,4∙1012kV / cm2.c. The irradiation dose Φ did not usually exceed 1∙1018kV / cm2, because, at a higher Φ, the base was compensated and it became too high resistance for measuring the NCSDL [8].

The NCSDL spectra were measured in the constant-capacitance mode using the setup described in [6]. Its absolute sensitivity is 102 pF, the ratio of the voltage recording times t2/t1=3, the gating windows varied within 0.5 - 500 ms, the diode voltage usually did not exceed 10 V.

Typical NCSDL spectra of n- and p-Si after irradiation and annealing are shown in Fig. 1 and 2. The parameters of some RDs are given in Table 2 and are in good agreement with the literature data [5-7].

Uniaxial deformation was created using a lever system, which in its design was almost similar to that described in [2]. The system used made it possible to create a pressure of up to 4 GPa with a sample area of 1 mm2. To measure the NCSDL spectra, the sample together with the holder was cooled to the temperature of liquid nitrogen. The sample was heated to 300 K rather slowly - in about an hour. The temperature T was measured with a copper - constantan thermocouple.

The sensitivity of most of the investigated DL to uniaxial deformations turned out to be relatively low, and to determine the effect of pressure P on the ionization energy Ea of the level, measurements were carried out in the switching mode: with a slow change in T, the pressure was changed from P = 0 to the maximum value. In fig. 3 shows a typical NCSDL peak measured in this mode. The change in Еa was estimated from the temperature shift of the NCSDL peak:

If the DL had a high sensitivity to pressure and there was a noticeable shift of the NCSDL peaks at P> 0, then the level parameters were determined in the usual way by changing the gating windows. The accuracy of determining ∆Ea in this case was of the order of ± 0.02 eV. 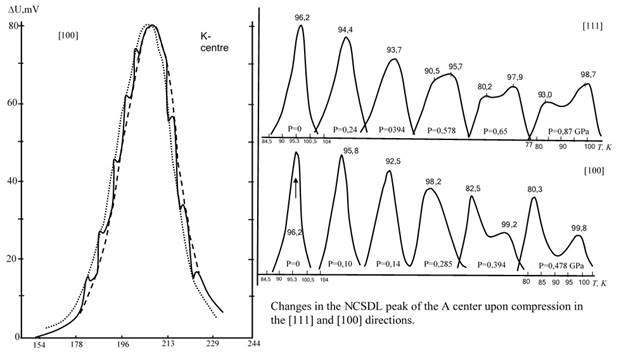 Measurement results and discussion. Radiation defects in n-Si. Immediately after irradiation in p-Si, a series of RDs with DLs are formed (Fig. I, curve 2). The tensosensitivity of the A- and E-centers was investigated in detail. The rest of the RDs had a low concentration and for them Ea and the electron capture cross sections

A-center. After irradiation, the A center with Еa = Еc - 0.17 eV dominates in n-Si diodes, because the original silicon was obtained by the Czochralski method and had an oxygen concentration of

. The A-center had a high sensitivity to mono pressure. In fig. 4 shows the dependence of the NCSDL peak for this center on P in the (100) and (111) directions, and in Table. 2 - β values obtained in this work and in work [2]. The results of both works are in good agreement with each other.

As a result of annealing, a new RD is formed, called the L-center, with a concentration of the order of 1∙1013 cm-3. The width of the NCSDL peak associated with this center corresponds to a DL with a fixed ionization energy and at Р=0  Еa =Еc - 0,33 eV. The electron capture cross section, determined from the Arrhenius line, is of the order of 4,6∙10-16 cm2. The nature of the L-center is debatable and, possibly, it is a divacancy-oxygen complex [7]. With further annealing, the concentration of the L-center decreases and the field of heat treatment (HT) at 350°C for 2 hours, its concentration becomes below the sensitivity limit of the setup.

Radiation defects in p-Si. Immediately after p-Si irradiation, several RD levels appear in the lower half of the band gap (Fig. 2, curve I). The tensosensitivity of the K-center was investigated in detail. The amplitudes of the other peaks were small to determine β with sufficient accuracy, and for these levels Ea and the capture cross section of holes

Upon deformation, the NCSDL peaks of all zinc levels shift to lower T, but these displacements are small. The isotropic change in Ea of the acceptor states Ev + 0.28 and Ev + 0.62 eV confirms the assumption that zinc atoms associated with these DL are located in the sites of the silicon lattice. Small values of β show that zinc at the sites behaves like a shallow acceptor impurity despite the large absolute value of Ea.

Platinum. With diffusion alloying, platinum forms in silicon acceptor Еc - 0.26 eV and donor Еv + 0.36 eV levels [9], as well as level Еc - 0.53 eV. In p-Si, acceptors prevail, in p-Si - donors. Under uniaxial compression, the NCSDL peaks of all levels are shifted insignificantly. In silicon doped with vanadium, chromium, nickel, and sulfur, the effect of uniaxial compression on Ea was investigated only in the (111) direction.

Conclusion. Thus, of the investigated DL created by RDs and impurity atoms, only the levels of the A and L centers have a noticeable tensosensitivity and their splitting occurs under the action of oriented deformation. Ea of other investigated DL depends much weaker on P. It is of interest to change the tensosensitivity of E and K-centers after low-temperature treatment. In this case, neither the parameters of the center (the NCSDL peak does not shift along the temperature axis) nor its symmetry change.