The article represents the results on the saturation of the surface of steel wear parts of machines, apparatuses and technological equipment with boron, as an effective method of increasing the service lifetime. A method has been developed that increases the hardness of the working surface depending on temperature and time.

Introduction. Increasing the reliability and durability of machines, technological equipment and devices is one of the urgent problems of modern production. The solution of this problem will make it possible to increase the overhaul period of machines, apparatus, equipment and reduce the cost of their operation. The great importance in this regard is an effective method of increasing the service lifetime of wear parts of machines, apparatus and equipment, their chemical-thermal treatment, in which the steel surface is saturated with one or another element by its diffusion in the atomic state from the external environment at high temperature. Chemical-thermal treatment consists in heating the product to a given temperature in a solid, gaseous or liquid medium, which easily releases a diffusing element (for example, the element boron), holding at this temperature and subsequent cooling.

The performance of the surface layer is mainly determined by its chemical composition, structural and phase state. To improve the performance of machine parts in the domestic and foreign industries, a large number of charge complex in composition containing various strengthening elements (B, N and others.) is used.

Objects and methods of research. Boron is included in the third group of the periodic system of chemical elements at number 5 and has an atomic radius of 0.97Å. The melting point of boron is in the range of 2000-2500 °C. Boron has a low electrical conductivity, which increases with increasing temperature. At high temperatures, boron actively reacts with oxygen, nitrogen, chlorine, carbon, iron and other elements. Combinations of boron with metals are called borides. With carbon, boron forms boron carbide В4С [4]. 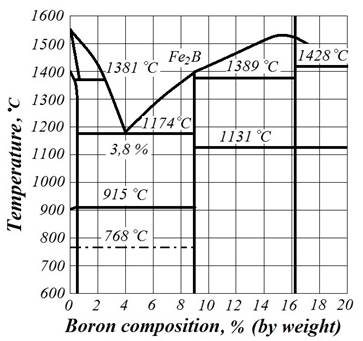 Picture 1. State diagram of Fe – B

The solubility of boron in iron is very low and as follows from the state diagram (Fig. 1), it is practically independent of temperature and is approximately 0.10 - 0.15%. At a content of 8.84% B, a chemical compound is formed - iron boride Fe2B, and at a content of 16.25% B - FeB. Fe2B boride melts at 1380°C. FeB boride melts at 1540°C. the hardness of borides is very high: for Fe2B it is more than HB 1500, and for FeB it is more than HB 2000, which exceeds the hardness of the abrasive. Such a high hardness predetermines a very high brittleness. Iron borides practically do not have the ability to be plastically deformed.

At present, the saturation of steel with boron in powder mixtures has become widespread. As boron-containing reagents, boron powder, ferroboron, ferroboral, and a mixture of boron carbide with borax can be used. [3]

Optimum coating properties are obtained by boriding steel in a mixture consisting of 84% boron carbide and 16% borax. However, when the container with parts is heated with this mixture, the borax melts, and when cooled to room temperature, it solidifies, mixing with boron carbide, and forms a dense solid mass. This makes it difficult to extract the borated parts, as well as the further use of the mixture. The addition of intensifiers and inert media to the mixture complicates the preparation of saturating media and makes it difficult to reuse them. The aim of this study was to study the kinetics of boriding and the properties of diffusion layers formed during the saturation of carbon steels in commercial boron carbide. The study was carried out on Armco iron, steels 20, 45, and U8. Before boriding at 850-1000°C with exposures of 2, 4, 6 hours, the samples were degreased in gasoline. Boriding was carried out in crucibles made of 1Х18Н9Т steel. Boron carbide calcined at 400°C with particles 16 µm in size was used as a saturating medium. Liquid glass was used as a shutter to prevent the samples from oxidizing during heating and holding in the crucible. After the end of boriding, the crucibles were cooled in air, then the samples were washed in boiling water. Then the samples were subjected to microstructural analysis, on the basis of which the kinetic curves of the dependence of the depth of the borated layer on temperature and saturation time were built. (Fig. 2)

Results and its discussion. The microhardness and the thickness of the diffusion layer were determined on a PMT-3 device in at least three fields of view with the calculation of average values. Diffusion layers formed in technical boron carbide and in electrolysis boriding are almost the same. The boride layers consist of two acicular phases FeB (outer zone) and Fe2B (inner zone). When steel У8 is borated, carbon is pushed deep into the metal, and a phase is formed in the transition zone, which, according to microstructural analysis and microhardness values, is boron cementite. The hardness of the boride phases, depending on the carbon content in the steel, changes insignificantly and amounts to 1800-1950 for FeB HV and 1350-1400 for Fe2B. 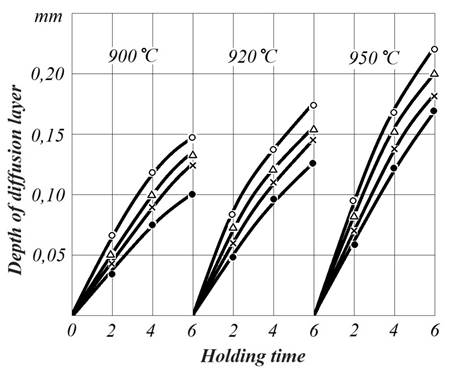 Figure. 2. Influence of temperature and holding time on the depth of the borated layer of carbon steels:

According to our data, optimal boriding is observed at 900–950°C. When the process is carried out at lower temperatures, longer exposures are required to obtain a layer of the required depth, and an increase in temperature above 950 °C is accompanied by a significant growth of matrix grains [2].

The borated layer has high hardness and brittleness. To create a strong lining under a thin, hard borated layer, the samples must be hardened. Samples for hardening should be heated in a salt bath, and cooled in isothermal environments.

It should be noted that due to the occurrence of large residual stresses during boriding [3], the layer sometimes breaks off. To prevent chipping, sharp edges of parts must be eliminated. In addition, the depth of the borated layer on carbon steels should not exceed 0.10 - 0.15 mm [1].