The system NaClO3∙CO(NH2)2-H2SO4∙NH2C2H4OH-H2O was studied by the polythermal method of solubility in the temperature range from -65.2 to 60 °С. On the basis of the solubility polytherms of binary systems and internal sections, a polythermal diagram of the solubility of this system is constructed. The fields of ice crystallization, NaClO3∙CO(NH2)2, CO(NH2)2, H2SO4∙NH2C2H4OH and compounds of the composition Na2SO4∙NH2C2H4OH are delimited. Chemical and physicochemical analyzes were performed to identify the newly formed compound.

Introduction. The unfavorable arrival of autumn weather can negatively affect the yield and quality of crops. Agrochemical measures, such as defoliation are applied to a range of crops to prevent yields from declining as a result of such natural factors.

Defoliants and desiccants are classified as harvest aids because they are commonly used to facilitate mechanical harvesting [1-3].

The effectiveness of the harvest aid depends on the environmental conditions before, during and after application [5, 6]. Therefore, it is important to use the drugs on time, that is before the onset of cold weather.

Existing chlorate-containing preparations do not meet modern requirements due to some properties, i.e. they have a “hard” effect on the plant and completely destroy it and its immature boxes, which in turn leads to a decrease in potential profitability. Currently, it is necessary to offer effective multifunctional “soft” acting drugs by adding physiologically active substances to chlorate-containing defoliants. [7]. Therefore, the synthesis of valuable drugs containing physiologically active substances has become one of the priority and necessary directions for the development of modern innovative technologies. [8].

Methodology and materials. Sodium monocarbamidochlorate was used for the study, which had synthesized by dissolving urea together sodium chlorate in a 1: 1 mol ratio. After the formation of a homogeneous solution of the initial components, it was cooled, after which crystals of the compound NaClO3·CO(NH2)2 were obtained. Based on the neutralization of monoethanolamine with 94% sulfuric acid (in 1:0.60 molar ratio), sulfate monoethanolamine was synthesized.

The solubility polytherm of the NaClO3∙CO(NH2)2-H2SO4∙NH2C2H4OH-H2O system was investigated by the visual polythermal method [9]. Liquid nitrogen was used as a freezing reagent in the study of solution solubility.

Chemical and physico-chemical analysis methods were used to identify the obtained new compound. In the quantitative chemical analysis of liquid and solid phases, the content of the chlorate ion was determined by the volumetric permanganatometric method. [10], sodium-by flame photometry [11], elemental analysis for carbon, nitrogen, hydrogen was carried out according to the method [12]. The MIRacle10 IR spectrometer was used to identify the source material and the new compound [13,14].

Results and discussion. The binary system NaClO3 · CO(NH2)2-H2O was studied by the author [15], this system is part of the system that we are studying and our data are in good agreement with the literature.

The solubility of the NaClO3∙CO(NH2)2-H2SO4∙NH2C2H4OH-H2O system was studied using seven internal incisions. Based on the results of the study of binary systems and internal incisions, the complete polythermal diagram of this system was constructed in the temperature range from -65.2 to 60 °C. On the phase diagram of the solubility of the NaClO3∙CO(NH2)2-H2SO4∙NH2C2H4OH-H2O system, the crystallization fields are distinguished: ice, urea, sodium monocarbamidochlorate, monoethanolammonium nitrate and compounds of the composition NaClO3·CO(NH2)2. The indicated fields converge at two triple nodal points of the system, for which the compositions of the equilibrium solution and the corresponding crystallization temperatures are determined, which are shown in Fig. 1.

The projections of the polythermal curves on the corresponding lateral water sides of the system wera constructed. The solubility diagram (Fig. 1) shows that a new compound of the composition NaClO3·CO(NH2)2 is formed in the studied system. 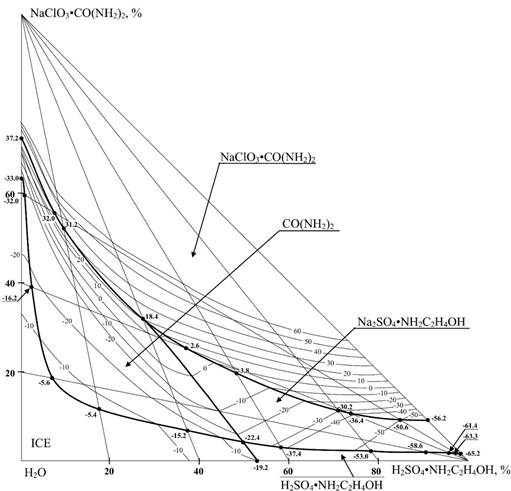 On the polythermal diagram, the fields of the formed crystals of the system are highlighted with bold lines, and these fields are named accordingly.  These fields occur at four triple nodal points of the system, for which the corresponding compositions of the equilibrium solution and the crystallization temperatures are determined (Table l).

Double and triple points of the system

The compound Na2SO4∙NH2C2H4OH was isolated in the crystalline state and identified by chemical methods and infrared spectroscopy methods.

Chemical analysis of the solid phase of the separated compound Na2SO4∙NH2C2H4OH from the assumed crystallization region gave the following results:

It is well soluble in water. At –10 and 0°С it respectively dissolves 57.1 and 69.8%. In organic solvents - in ethyl alcohol it is completely soluble, insoluble in toluene and chloroform, and when acetone is used as a solvent, excess monoethanolamine is washed out from the compound, and it remains in a pure white crystalline form. This means that acetone can be as a detergent in obtaining crystals of the compound in its pure form.

To clarify the connections in the composition of the isolated new compound, the IR spectra of monoethanolammonium sulfate and the new compound were studied (Fig.2).

In the IR spectra of the compound, ethanolamine sulfate is formed due to the loss of the OH group in monoethanolamine. Elongated vibrations in the range of 3081-2968 cm-1, corresponding to the NH2 group, were observed in the new compound. The difference between these values (∆ν) is used as a criterion of the structure of the molecule. Vibrations in a field of 2483-2268 cm-1 are symmetric and asymmetric stretching vibrations of the CH2 bond, and the vibration bands at 768 [νas SO4] and 416 cm-1 [νs SO4] are asymmetric and symmetric stretching vibrations of the SO4 group. The value of ∆ν equal to 352 cm–1 points to a significant asymmetry of the SO4 group. Thus, there is a loss of valence vibrations of OH-lines in the region of the IR spectra of the compound (Fig. 2. B). 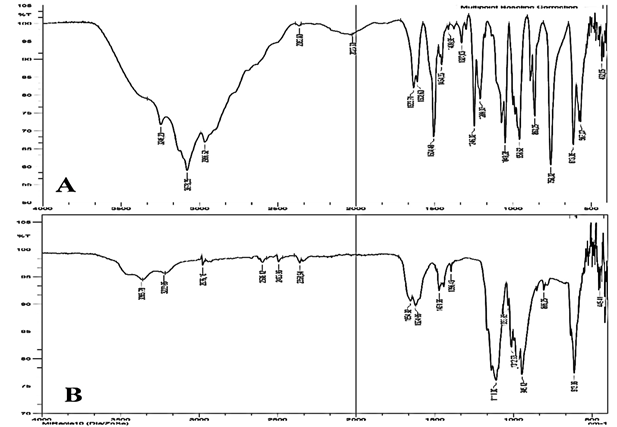 The difference between monoethanolammonium sulfate and the resulting new compound was also evident with the peaks representing the functional groups on their IR spectral diagrams.

Conclusions. Thus, from the study of the solubility diagram of the NaClO3∙CO(NH2)2-H2SO4∙NH2C2H4OH-H2O system, we established the formation of a new chemical compound Na2SO4∙NH2C2H4OH, which was identified and confirmed by chemical and physico-chemical analysis methods.

The results of this work will be used to develop a technology for the production of a new mildly acting and effective defoliant by adding physiological active substances to chlorate-containing (monocarbomide chloratanatry) defoliants.

Basic doctoral student, Institute of General and Inorganic Chemistry of the AS RUz, Uzbekistan, Tashkent

Junior researcher, Institute of General and Inorganic Chemistry of the AS RUz, Uzbekistan, Tashkent

Doctor of Science in Technics, Institute of General and Inorganic Chemistry of the AS RUz, Uzbekistan, Tashkent

Doctor of Science, academician, Institute of General and Inorganic Chemistry of the Academy of Sciences of the Republic of Uzbekistan, Uzbekistan, Tashkent