WAYS TO INCREASE THE ENERGY EFFICIENCY OF AN AUTOMATED SOLAR INSTALLATION

The article discusses ways to increase the energy efficiency of a solar installation using automation, the choice of the optimal structural and structural scheme, as well as accepted methods of orientation of the installation to the sun and the use of a convenient tracking system.

To optimize solar installation it is advisable to use optical and software system for the tracking of solar concentrators. This allows to achieve the required accuracy and the operational control of tracking systems, and therefore contribute to the energy efficiency hub for various purposes. As you know, there are developed various systems of power plants based on conversion of solar energy into thermal energy.

The efficiency of energy systems in their long-term functioning, to a large extent depends on the chosen structural scheme, design, materials, accepted ways of exploitation and utilization of energy sources [1]. Currently widely used structural diagram energy systems and facilities without the implementation of extreme regulatory regime of its power [2]. In such stand-alone solar power plants are mainly used simple temperature controllers, current, voltage, charge and discharge the battery, and others. To increase the coefficient of energy efficiency of a solar power plant of not less than 30-50% is possible by the following main ways [3]:

– implementation of the mode of selection of hot water or power;

– implementation of continuous automatic tracking of a solar collector or photovoltaic panels with the Sun;

The effect of the implementation of the mode of power regulation of solar installations depends on the range of variation of the operating temperature of a solar power plant. Solar installations are used in widely varying operating conditions. They are strongly influenced by the environment. Their performance characteristics are nonlinearity and instability.

Implementation of automatic tracking solar plants follow the Sun, is the most effective way to improve energy efficiency of power plants.

From a preliminary analysis of energy efficiency of systems of automatic tracking of the Sun is that the efficiency for Fergana relative to the horizontal location of solar collectors is:

– when placing the solar collector at an angle equal to the latitude location where you are installing the solar installation – 40%;

– if you use dual-axis tracking system the Sun is 71%.

The average for various regions of Uzbekistan energy efficiency through the use of systems for tracking the Sun increases by 11% for single-axis systems and 26% for biaxial.

Stepping method of search of extremum power is most suitable for use in standalone solar power plants, since approval extreme regulator with automatic shut-off valve operating temperature of the coolant or the charger is carried out simply by a discrete adjustment of the feedback circuit to the channel voltage of the solar battery.

The regulator of any extreme performance (analog-to-digital, digital, microprocessor) hardly increases the weight control apparatus has small power consumption and increases the efficiency of the solar installation to a maximum value [1, 4].

III. The choice of optimal structural scheme of the automated system for solar power installations.

In Fig. 1 is a block diagram of the automated system for solar power installations. 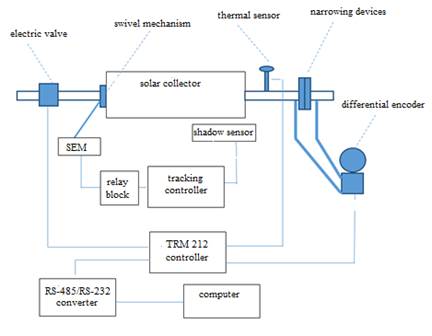 This system includes two chains of independent control.  In the first chain, an automatic tracking system for solar collectors based on the Arduino microcontroller was developed.  The controller, receiving signals from photoelectric tracking sensors, generates a control signal in a discrete format.  The generated signal is issued to the control unit, which, amplifying, controls the operation of the electric drive, consisting of a single-turn SEM electric motor (electric single-turn mechanism) with a gearbox.  The tracking mechanism provides guidance of the solar collector in the sun.  The permissible error (threshold) between the signals in the inclined planes of the sensor photocells, at which it is necessary to monitor the collector for the Sun, is 5% (this value can be set in the controller) [5].

Once the optimal position is found, the microcontroller sets a timer and waits for the next cycle of work after a specified time.  This process will continue until the reset button is pressed.  The tracking graph is shown in the following figure [6].

In the second chain, the microcontroller maintains the temperature parameter of the input and output of the heated water in the collector.  The following instruments and devices participate in the automation chain:

The technical result of the second part of automation is to increase the efficiency and reliability of the solar power plant.  Improving the efficiency of the device is achieved by improving the mode of thermal accumulation, since a portion of hot water not used by the consumer, making a repeated cycle of receipt in the solar thermal collector, transfers part of its energy to the heat accumulator.  Improving the reliability of the solar device is achieved by increasing the rate of periodic heat removal of solar radiation in batches, by applying water selection over an automatically set temperature range, which prevents the accumulation of scale in the inner surfaces of the working channels of the solar thermal collector.

Thus, achieving the energy efficiency of a solar installation can be achieved in the following ways:

- it is advisable to track the solar collectors behind the Sun on the basis of the requirements to ensure accuracy of pointing to the Sun and the minimum consumption of electric energy by electric drives;

- in order to save energy, at the end of the cycle of pointing the solar collector to the Sun, it is necessary to turn off the drivers of the electric drive and organize the positioning mode, which can significantly reduce the consumption of electric energy.

- An analysis of the developed designs of orienting systems showed that for standard designs, the tracking error is of the order of 0.1-0.6 degrees.  considered valid.  However, it should be noted that the higher the tracking accuracy, the higher the efficiency of the solar power plant.

- increasing the reliability of the solar device is achieved by increasing the rate of periodic heat removal of solar radiation in batches, by applying water selection over an automatically set temperature range, which prevents the accumulation of scale in the inner surfaces of the working channels of the solar thermal collector.