Research of the hydraulic resistance of the inertial scrubber

Introduction. The devices used in the purification of industrial secondary gases are selected based on the physical and chemical composition of the purified gas, its average median size and the different mechanisms of the gas. There are dry and wet methods of secondary gas purification in the industry, these types of devices are considered to have low hydraulic resistance and high operating efficiency. But the level of dry cleaning is much lower than the level of manual cleaning. Therefore, today in the world there is a tendency to use the wet method in the purification of industrial dust and secondary gases. This method also has its disadvantages, for example, the energy consumption for the cleaning is higher than the dry method, which has to recycle dust and gases absorbed into the liquid medium. In addition, the efficiency of the devices does not always meet the requirements of the existing environmental standards on the level of maximum allowable concentration (MAC) of harmful substances released into the atmosphere. This is mainly due to external influences loaded on the device and the high addition of dust and secondary gases to the gas flow. New effective methods or external energy exposures will need to be applied to increase the likelihood of dust and secondary gases colliding with liquid droplets [1]. For example, a liquid used to purify gases at high temperatures evaporates. But it is not used to purify gases from steam. If ways and means of using this steam are created, the energy spent on cleaning can be reduced by 50%.

In addition, most devices currently in use come into contact with the fluid at a specific contact element. This, in turn, requires setting a finite value of the gas velocity and the amount of particles in the stream. Therefore, the mass transfer processes slow down or complete mass transfer becomes difficult. In this regard, it is more efficient to identify and apply the method of inertial transfer of gases directly to the internal environment of the liquid.

These types of devices are highly efficient and have a gas cleaning efficiency of up to 99%. But the energy savings of the devices are not so high. Therefore, when choosing a particular structure, it is necessary to take into account a set of technical and economic characteristics. In addition, given the similarity of the characteristics of the devices in research work, the issues of determining the optimal performance and reducing energy consumption at work are relevant.

The object of research. Based on the above, a new design scheme of the industrial secondary gas cleaning inertial scrubber and a laboratory version for experimental research were developed (Figures 1 and 2). 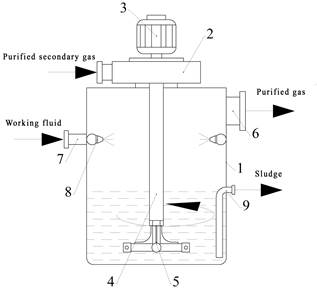 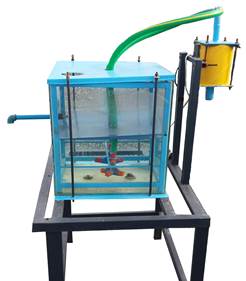 The device consists of a rotating syringe and a secondary gas supply pipe and fan, a cylindrical vertical body equipped with a liquid spray nozzle, a collecting bath and a sludge pipe, and a pipe for the release of purified gas into the atmosphere. a syringe (four rotating 90 ° injectors are mounted on the rotating syringe and it is attached to the guide tube with a seal and a fastening ring. The nozzle holes are placed parallel to the liquid.) is immersed in a bath in which the working fluid is collected. As the purified gas passes to the syringe, the injectors rotate in the liquid medium according to the difference between the gas pressures in the guide tube and the syringe. The gas to be cleaned is discharged through the nozzle holes and is in contact with the working fluid. The gas is purified during its movement in the liquid medium. The purified gas is released into the atmosphere through a tube. The main advantage of the device over existing scrubbers is that, firstly, the use of working fluid increases due to the rotation of its injectors in the liquid medium, and secondly, the rotational motion of the syringe provides a curvilinear movement of gas flow in the liquid medium. This in turn increases the mass transfer coefficient.

Research results. To keep the viscosity and level of the working fluid in the device and to re-purify the secondary gases emitted by the untreated air in the working body, the nozzle S32-412 (hole diameter dn = 3 mm, 4 pieces according to the diameter of the device body) was installed. α was chosen to be 90 °C accordingly. 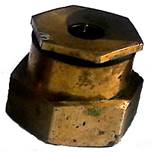 In the experimental determination of fluid flow, each experiment was repeated 5 times, and the square dimensions of each point and the resulting errors were determined. When the rotometer scale readings changed to 0 ÷ 90, the fluid flow rate changed to Q = 0.068 ÷ 0.360 m3/h. In each indicator, the flow change increased by 0.044 m3/h step.

Local resistances to the working fluid are affected in the fluid pipe and nozzle. The magnitude of the coefficient of friction in turbulent flow depends on the mode and the roughness of the pipe. If the working fluid supplied to the device passes through the pump and the liquid pipe and the novelty of the selected pipe is taken into account, then it is possible to assume that the local resistance coefficient at a distance to the nozzle is 1.2 [5, 6, 7].

To determine the gas velocity, consumption and resistance coefficients of the working bodies of the device (Operational efficiency Qmax = 350 m3/h; electromotive force Ndv = 1.5 kW; rotation frequency n = 1800 rpm) of the centrifugal type, gas velocity ANEMOMETER VA06 -TROTEC (measuring range 1.1 ÷ 50 m/s, error coefficient 0.2%, gas velocity exceeding 50 m/s, error coefficient up to 5%) electronic meter, device for determining the pressure of dusty gas in the working bodies of the device JM- Electronic measuring device brand 510, the automatic adjuster (measuring line in the range of 0 ÷ 20 mm) is installed on the fan to control the gas velocity. In order to transfer the purified gas to the liquid medium, a four-stage injector (puller) with a hole diameter df = 2.3.4 mm and a thickness of 3.5 mm was used. Figure 4 shows an overview of the puller. Each experiment was repeated 5 times. 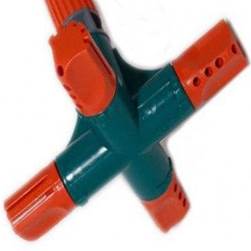 Figure 4. General view of the puller

An overview of the puller is shown in Figure 4 and the experimental results are shown in Figure 5. Experiments were carried out in accordance with RD 34.20.519-97 “Testing of hydraulic resistance of pipelines. Machines and apparatus for measuring gas consumption and pressure. Program and methods of testing ” [8]. 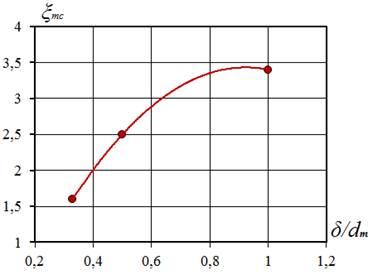 Figure 5. The dependence of the coefficient of resistance of the nozzle (ξш) on the diameter ratio (δ/dш) of the hole thickness.

From the data given in Figure 5, it can be seen that as the diameter of the injector hole increases, the area of exposure to the secondary gas decreases and the efficiency of the transition of the gas to the liquid medium increases. This, in turn, leads to an increase in the volume of gas bubbles dispersed in the liquid medium and a decrease in the mass transfer coefficient (Figure 6).

Figure 6. The appearance of gas bubbles formed in the working fluid environment:

The following empirical formula was obtained using the least-squares method for the dependencies shown in Figure 5 [13].

Differences in the number of cyclic cycles at different values of the variables. 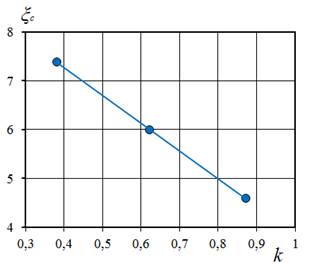 Figure 7. The correction factor k varies with respect to the resistance coefficient ξ.

The following empirical formula was obtained using the least-squares method for the dependencies shown in Figure 7 [13].

The hydraulic resistance of the device was investigated using the total resistance coefficients determined for different values of the variable factors.

The temperature for the water and gas system was set at 20 °C ± 2, taking into account the influence of the external environment during the experiments. The results of the experiment were processed using an ECM and the dependence of hydraulic resistance on different values of variable factors was investigated in the absence of fluid supply to the device. Based on the results of the experiments, a comparison graph of the dependence of hydraulic resistance on the gas velocity was constructed. (Figures 8; 9 and 10). 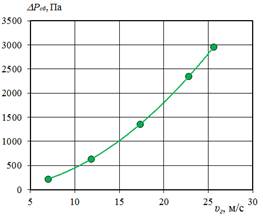 Figure 8. The hydraulic resistance of the device depends on the gas velocity υг of ΔPcб. 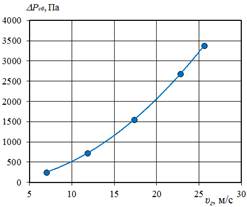 Figure 9. The hydraulic resistance of the device depends on the gas velocity υг of ΔPcб. 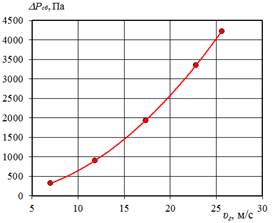 Figure 10. The hydraulic resistance of the device depends on the gas velocity υг of ΔPcб.

The following empirical formulas were obtained using the least-squares method for the graphical dependencies shown in Figures 8, 9 and 10 [13].