Studying the infrared spectrum of reaction of monoethanolamine with formaldigid

Today, as a result of the discovery of new deposits of natural gas and the increase in the number of products obtained from the processing of natural gas, it is necessary to improve the cleaning processes. At the same time, an urgent task is the search for and introduction into the gas treatment processes of new highly efficient accessible and cheap alkanolamine chemisorbents and the development of the technology for their application.

DEA-process of gas purification has become widely used in recent years. In particular, this process is used to purify gases containing COS and CS2, as it forms compounds with them that are easily hydrolyzed at elevated temperatures with the release of H2S and CO2.

There are two types of DEA-process - the usual DEA-process (concentration of DEA in solution 20-25%, absorption capacity 0.6-0.8 mol / mol) and DEA

The rate of absorption of CO2 in an aqueous solution of diethanolamine (DEA) was measured using the Lewis element to determine the kinetic parameters of CO2 - DEA. The absorption rate was controlled by mass transfer from the gas side, which was achieved by controlling the total pressure inside the element. Based on measurements of H2S absorption in water the DEA solution deduced the mass transfer coefficient from the gas side. The kinetic rate constant of the zwitterion formation reaction is in good agreement with the existing literature values. Measurements of the rate of absorption of H2S in aq. a DEA solution, into which CO2 was previously introduced, showed a competition between the absorption of H2S and the desorption of CO2. The model of the rate of mass transfer, which takes into account the influence of a chemical reaction, makes it possible to simulate these opposite processes of mass transfer  [3] Ethanolamine purification does not allow purifying the gas to a hydrogen sulfide content of less than 0.5%. Apart from MEA, other amines are also widely used as chemisorbents for purification from acidic components. Diethanolamine (DEA), methyldiethanolamine (MDEA), diglycolamine (DHA) and diisopropanolamine (DIPA) are also selective absorbents for hydrogen sulfide. The first three absorbents are more resistant to the action of COS, CS2 and CO2, and are less subject to entrainment. The disadvantages are lower reactivity and absorption capacity. DIPA provides fine gas purification and, despite its high cost, has become widespread abroad for the purification of gases from hydrogen sulfide [4]. Hexohydrotriazines are very effective absorbers widely used abroad [5]. So, for the purification of oil and gas from acid gases, for example, Triasorb, Additol, RF, Kerofin (BASF AG, Germany) are widely used [6, 7]. It should be noted that in the Republic of Uzbekistan until today, mono-, di-, methyldiethanolamines are used as absorbers of hydrogen sulfide and other sulfur-containing compounds, and hexahydrotriazines widely used in Russia, Europe and the United States, which effectively work to absorb sulfur-containing compounds, are not imported at all. In light of the above, the aim of this work was to study the conditions for the formation of N, N ', N" tris (β-hydroxyethyl) hexahydro-S-triazine [8].

For the synthesis of hydroxylase-containing compounds, monoethanolamine was used according to TU 6-02-915-74, grade one, the content of the main substance was not less than 99%. Monoethanolamine was vacuum purified by distillation at 343K / 1.6 kPa. The purified product had = 1.4539. Formaldehyde was used in the form of an aqueous solution - formalin according to GOST 1625, according to which the content of the basic substance is 37.0 ± 0.5%, the density is 1092 kg / m3, methanol is up to 8%. An installation is assembled, consisting of a four-necked flask, a stirrer, a capillary for supplying an inert gas, a separating funnel, an electric stove for heating and a water bath. A certain amount of formaldehyde is poured into the flask in the form of formalin. Monoethanolamine is poured into a separatory funnel. Turn on the stirrer and start dosing of monoethanolamine. At the end of the addition of monoethanolamine, the color of the reaction mixture turns light yellow. Then turn on the heating and the reaction mass is heat treated at a temperature of 50°C for 30 minutes. In the course of heat treatment, the color of the reaction mixture changes from light yellow to dark cherry, the viscosity increases [9, 10]. The finished product is purified by vacuum distillation. The distilled N, N ', N"- tris (β-hydroxyethyl) hexahydro-S-triazine after cooling to a temperature of (20-25)°C has a viscosity of 1175 mPa · s, = 1.5180, a density of 1175.8 kg / m3 ... The technical product was obtained after distillation of water. The technical product is a dark cherry-colored viscous liquid.

IR spectra of the starting and synthesized compounds were recorded on an IR Fourier spectrometer IRTracer-100. Samples in the form of a thin film were obtained by applying or spraying a liquid or powder of the test substance onto the surface of a prism [11].

In the IR spectra of TOEGT synthesized at a molar ratio of MEolA: FD = 1: 1 (Fig.1c), absorption bands characteristic of primary amine (3530-3200, 1318.963.711cm-1), carbonyl (1644cm-1) groups disappear , new absorption bands appeared at 1653cm-1. The absorption bands of hydroxyl groups did not undergo significant changes. This, apparently, indicates the occurrence of the reaction between the amine and carbonyl groups and the formation of a heterocyclic compound at the final stage of the process. The predominant formation of N, N', N'' -tris- (β -hydroxyethyl) hexahydro-S-triazine under our chosen conditions is indicated by the appearance of absorption bands of primary associated hydroxyl groups at 3200-3400 cm-1, 1005 cm-1, methylene groups at 2850-2950 cm-1, - СH2 - N - bonds in the cycle at 1646 cm-1 [13, 14]. 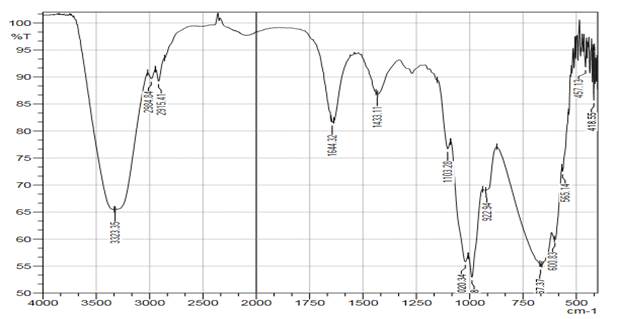 Similar to this product in the IR spectra (Fig. 3) of the compound synthesized at a molar ratio of 1: 4 there is no absorption band of hydroxyl groups at 3200 - 3200 cm-1 and there are absorption bands characteristic of the oxazolidine cycle.

The data presented allow us to conclude that the products of the MEolA: FD reaction synthesized at a molar ratio of 1: 1 are N, N ', N "-tris- (β-hydroxyethyl) -hexahydro-S-triazine. An increase in the amount of FD taken for synthesis to 2 and higher already leads to the formation of N, N-methylene-bis-oxazolidine [16].

The data presented show that the direction of the reaction of MEolA with FD is mainly determined by the molar ratio of the starting amino alcohol and aldehyde. In this case, by varying the molar ratio, one can obtain sym-hexahydrotriazine or a bicyclic product - methylene-bis-oxazolidine. Taking into account the literature data [17], the following reaction scheme for MEolA and formaldehyde can be proposed:

Thus, as a result of the carried out studies of IR and PMR spectroscopy, the structures of the synthesized products of the reaction of monoethanolamine with formaldehyde have been established. It has been shown that the reaction product synthesized at a molar ratio of MEolA: FD = 1: 1 is N, N ', N "-tris- (β-hydroxyethyl) -hexahydro-S-triazine (I), an increase in the amount of formaldehyde to 2 and higher results in to the formation of N, N-methylene-bis-oxazolidine (II):

1. Conducted systematic complex studies on the synthesis of hydroxylase-containing monomeric and oligomeric compounds. Their physical and chemical properties have been studied.

2. The regularities of CO2 chemisorption by synthesized hydroxylase-containing compounds have been studied. The influence of their structure, nature and concentration of the working solution on the indicators of carbon dioxide chemisorption has been established.