The rapid development of mechatronics is caused by the sharply increased market requirements for consumer properties and quality of products of modern mechanical engineering. It is this factor that determines current development trends and stimulates scientific and technological progress in the field of mechatronics.

Thus, the creation of new generation equipment based on new technologies for the production of new products is the manufacturers' response to new market conditions. New requirements for the functional characteristics of technological modules and machines:

1. Ultra-high speed of movement of working bodies of machines, defining a new level of productivity of technological machines;

2. Ultra-high accuracy of movement required for the implementation of precision technologies (up to micro- and nano-displacements);

3. Maximum compactness of the design and minimization of the weight and dimensions of the modules;

5. Implementation of fast and accurate movements of working bodies along complex contours and surfaces;

6. A significant expansion of the technological and functional capabilities of the equipment is desirable without increasing its cost;

7. The ability of the system to reconfigure depending on the specific task or operation being performed;

8. High reliability and safety of operation.

The advanced world level in the field of machine tool building can be assessed by the latest equipment samples, which were presented by leading manufacturers at the international exhibition in Japan in November 2002. Drive systems of modern metalworking machines provide the following characteristics: working feed rate up to 15 m / min, idle speed up to 200 m / min, acceleration of drives when accelerating up to 3g, processing accuracy of about 2-3 microns, number of simultaneously controlled axes up to 20 in one processing complex.

It is obvious that to create machines with such technical parameters, fundamentally new approaches to the design and production of drive modules and systems are required. These include, first of all, mechatronics.

The methodology for the design of modules and machines based on the mechatronic approach is aimed at the synergistic integration of the element. 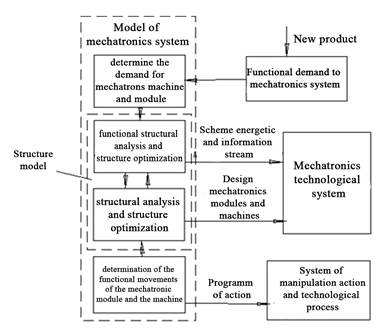 The key methodological idea of ​​this approach is the priority of the module function over its structural organization and constructive decision. Applying consistently performed procedures of functional-structural and structural-constructive analysis of mechatronic systems, the developer evaluates the decisions made, striving to achieve the maximum level of synergistic integration of elements.To use computer-aided design methods, interconnected functional, structural and constructive models of mechatronic modules are formed, then the movement of the mechatronic system in space and in time is planned, optimizing them, for example, according to the criterion of maximum speed. Within the framework of the program of innovative mechanical engineering, a number of organizations have begun to create a new generation of mechatronic machines based on mechatronic modules.

The conceptual projects are as follows:

The main advantages of these mechatronic systems are the elimination of multi-stage conversion of energy and information, simplification of kinematic circuits and, consequently, high accuracy and improved dynamic characteristics, structural compactness of the modules and, consequently, improved mass-dimensional characteristics. The possibility of combining mechatronic modules into complex mechatronic systems, and complexes that allow quick reconfiguration, relatively low cost of installation, configuration and maintenance of the system, due to modular design, unification of hardware and software, the ability to perform complex movements, thanks to the use of adaptive and intelligent control methods.

Tool for calculating wages / Structure and principles of construction of mechatronic systems. The external environment for machines of this class is the technological environment, which contains various main and auxiliary equipment, technological equipment and work objects. When the mechatronic system performs a given functional movement, the objects of work have a disturbing effect on the working body. Examples of such actions are cutting force for machining operations, contact forces and moments of forces during assembly, and the reaction force of a liquid jet during hydraulic cutting operations. 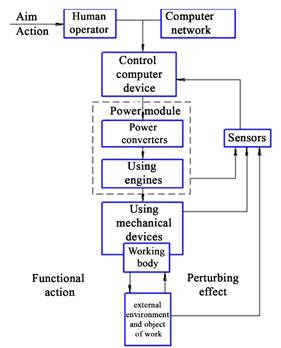 1. Control of the process of mechanical movement of a mechatronic module or multidimensional system in real time with processing of sensory information.

3. Interaction with the human operator through the machine interface in the offline programming modes (off-line mode) and directly during the movement of the mechatronic system (on-line mode).

4. Organization of data exchange with peripheral devices, sensors and other system devices.

The task of the mechatronic system is to transform the input information coming from the upper control level into a purposeful mechanical movement with control based on the feedback principle. It is characteristic that electrical energy (hydraulic, pneumatic) is used in modern systems as an intermediate energy form.