Synthesis, morphological and photoelectric properties of the (GAAS)1-X-Y(GE2)X(ZNSE)Y solid solutions

It is known that the semiconductor heterostruc­tures are now widely used for fabricating detectors and converters of optical radiation--they are an integral component of such important optoelectronic devices as heterojunction lasers. This has resulted in the intense development of the physics and technology of two-layer and multilayer semiconductor heterostruc­tures. Nowadays, three methods are predominantly used to obtain semiconductor heterostructures: liq­uid-phase epitaxy (LPE), chemical vapor deposition (CVD), and molecular-beam epitaxy (MBE). In the most widely used method LPE, an epitaxial layer is deposited from a solution-melt, which is in contact with the surface of a substrate for obtaining AIII-BV films. As a solvent, elements of Group III of the peri­odic table are used more often. CVD is used mainly for growing epitaxial heterostructures on the basis of AIII-BV semiconductors. In MBE, epitaxial layers are grown by deposition onto a substrate of atoms or mol­ecules, the fluxes of which are formed in ultrahigh vacuum. In all methods, a necessary condition for obtaining high-quality heterostructures is compatibil­ity of the lattice parameters of the substrate and the film, and also of the coefficients of linear thermal expansion of the materials [1, 2]. The physical proper­ties of heterostructures and the characteristics of devices on their basis depend mainly on the internal stresses and defects in the epitaxial layers. Thus, deter­mination of the optimum technological conditions, the structural parameters, and the physical properties of particular heterostructures is important from both physical and technological viewpoints. In this context, we present here the results of investigations carried out over the last years on the growth conditions, the structure, and the physical characteristics of the (GaAs)1-x-y(Ge2)x(ZnSe)y semiconductor alloy.

II. Growth technique for epitaxial layers of (GaAs)1-x-y(Ge2)x(ZnSe)y on a GaAs single-crystal substrate

The epitaxial layers under investigation were grown by the method of liquid-phase epitaxy with the tech­nique described in [3]. As substrates, we used GaAs washers 20 mm in diameter and ~350 pm thick, which were cut from single-crystal n-GaAs with the (100) orientation and doped with tin with a concentration of 3·1017 cm-3 with the resistivity p = 250 Ω·cm. The solution-melt composition was obtained on the basis of preliminary investigations of the GaAs-ZnSe-Sn-Ge system and published data from [4, 5]. The layers were grown from the tin solu­tion-melt by forced cooling in an atmosphere of hydrogen purified with palladium. The forced-cooling rate under optimal conditions amounted to 1-1.5 deg/min. Layers of the (GaAs)1-x-y(Ge2)x(ZnSe)y alloys were crystallized in the temperature range of 730÷640°C and with a growth rate of ϑ = 0.15 μm/min. At the initial moment of growth from the solution-melt, GaAs is crystallized because the solution is saturated in relation to GaAs at the cho­sen epitaxy temperature. At lower temperatures, conditions are implemented for the growth of (GaAs)1-x-y(Ge2)x(ZnSe)y alloy because the solu­tion-melt becomes supersaturated with the elements Ge and ZnSe at these temperatures. The grown epi­taxial layers had p-type conductivity, and the layer thickness amounted to d ~ 10 pm.

where rGa = 1.22 Å, rAs = 1.19 Å, rGe = 1.205 Å, rZn = 1.22 Å, and rSe = 1.20 Å are the covalent radii of gal­lium, arsenic, germanium, zinc, and selenium atoms from the data in [6]. It can be seen from (1) that the difference in the values of the sums of the covalent radii of atoms of GaAs, Ge2, and ZnSe molecules are insignificant, result in no substantial deformation of the crystal lattice, and satisfy the conditions of the for­mation of a continuous substitutional solid solution [7]. In addition, the sum of the atomic valences in the component molecules is mutually equal, which is also of importance for satisfying the conditions for electro­neutrality:

where ZGa = +3, ZAs = +5, ZGe = +4, ZZn = +2, and ZSe = +6 are the valences of gallium, arsenic, germa­nium, zinc, and selenium atoms, respectively. Thus, two important conditions for the formation of a con­tinuous substitutional solid solution [7] are satisfied in our experiments.

Structural determination of the substrates and the epitaxially grown films were carried out by an XRD-6100 diffractometer (Shimadzu, Japan) (CuKa-radiation). The voltage supplied to the tube was 40 kV, and the current was equal to 30 mA. The scanning range was 8°-90°, the scanning rate was 2 grad/min, and the step was 0.02°. The obtained data were processed by the Rietveld method with the use of the Fullprof pro­gram. The phase composition of the surface of the epi­taxial layers was determined. It was demonstrated that the distribution of the components of the films is uni­form over the surface while the content of Ge2 and ZnSe varies over the film thickness within the ranges 0 < x < 0.17 and 0 < у < 0.14, which decreases the elastic stress due to mismatch of the lattice constants of the substrate and of the film. Figure 1 demonstrates the distribution of solution-making components (GaAs, Ge2, ZnSe) over the thickness of the epitaxial layers (GaAs)1-x-y(Ge2)x(ZnSe)y As is evident from Fig. 1, the content of gallium arsenide decreases while the Ge and ZnSe contents increase to a value of 4 μm. Begin­ning with 4-6 μm, the solid-solution components remain constant. 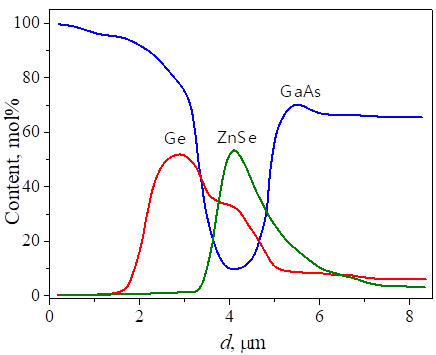 Figure 1. Distribution of GaAs, Ge2, ZnSe over the thickness of films d in epitaxial layers of the (GaAs)1-x-y(Ge2)x(ZnSe)y solid solution

Also, the photoluminescence spectrum of the sur­face of the (GaAs)1-x-y(Ge2)x(ZnSe)y solid solution was measured at a temperature of 4 K (Fig. 5). The photoluminescence was excited by laser radiation (λл = 325 nm) from the epitaxial layer, the signal was recorded by equipment unit SDL-2. As is evident from Fig. 5, the photoluminescence spectrum of the (GaAs)1-x-y(Ge2)x(ZnSe)y solid solution has a wide band containing much of the visual range with the maximum at Emax = 457 nm. This peak corresponds to an energy gap of ZnSe equal to 2.7 eV. Explicit accen­tuation of the peak of ZnSe emission against the back­ground of a wide photoluminescence spectrum, apparently, is evidence of the generation of a level with 2.7 eV ionization energy located ∆Еi = Eg, ZnSe-Eg, GaAs = 1.26 eV lower than the upper edge of the valence band of the GaAs parent semiconductor [8]. 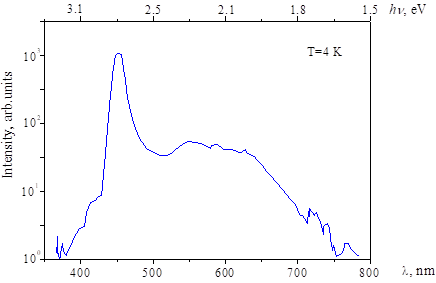 Figure 2. Photoluminescence spectrum of the surface of  GaAs)1-x- y(Ge2)x(ZnSe)y solid solution at room temperature of 4 K.

Because the applied laser radiation with an energy of 3.82 eV is almost completely absorbed in a sub-sur­face area of the epitaxial layer ~ 1 pm in thickness, pho­toluminescence emission is Igenerated exactly from this area of the film. However, up to a depth of 1.5 pm, the ZnSe content in the film is 12÷14 mol % (Fig. 1). Con­sequently, at the presence of such a content of ZnSe mol­ecules in the (GaAs)1-x-y(Ge2)x(ZnSe)y solid solution, they represent an isovalent impurity with a level located in the valence band of GaAs.

Surface studies of (GaAs)1-x-y(Ge2)x(ZnSe)y, solid solution were carried out using a Solver-NEXT atomic force microscope (AFM) [9], which measures the surface pattern and distribution of potential along the surface.

A three-dimensional image of epitaxial film is given in Fig. 6. It is clear that individual nanoislands of intrinsic size are formed on the surface. Analysis showed that the base diameter of islands varies in the range up to 60 nm, while height varies from 14 to 16 nm. During epitaxial growth of various semiconductor materials, the energy of deformation caused by the dis­crepancy of the lattice parameters of contact semicon­ductors is the main factor for the formation of self­organizing three-dimensional islands [10]. Because discrepancy of the lattice constants of GaAs/ZnSe and GaAs/Ge (0.323%) systems is identical, the formation of quantum dots is possible, such as ZnSe and Ge on the GaAs surface. It was shown in [11] that (GaAs)0.69(Ge2)0.17(ZnSe)0.14 epitaxial films grown on the GaAs substrate possessed different single-crystal structure with (100) orientation.

Figure 3. Three-dimensional image of the surface of the epitaxial film (GaAs)1-x-y(Ge2)x(ZnSe)y, (a) and the map of the local conductivity of ZnSe nanoobjects (b) [13]

Coherently located ZnSe nanocrystallites with the lattice parameter aZnSe = 5.667 Å and sizes of 59 nm along (100) direc­tions, respectively, as well as from Ge with the lattice parameter of aGe = 5.67 Å and sizes of 44 nm along (100) directions, respectively, were present in the film. It should be noted that the lattice parameter of ZnSe nanocrystallites in epitaxial film is ~0.22% higher than its tabular value, which is presumably caused by the lattice distortion of epitaxial film. The sizes of nanois­lands (quantum dots) obtained by AFM studies on the film surface and nanocrystallites measured by X-ray diffraction on epitaxial film were similar. Derived from these data, as well as the results of structural analysis of the structures, it can be stated that the observed nanoislands on the epitaxial layer surface are associated with ZnSe quantum dots.

AFM data show that ZnSe nanoislands on (GaAs)1-x(Ge2)x solid solution at the growth stage possess dome geometrical shape representing the islands with intrinsic lateral size of 55-60 nm with round base (Fig. 6-a).

Results of the studies of local conductivity of ZnSe nanoobjects on the surface of (GaAs)1-x(Ge2)x solid solution obtained by contanct AFM are given in Fig. 4b. Measurements of local dissipation resistance values were carried out in parallel with topography data. As follows from Fig. 4, light sections correspond to high currents and possess lower dissipation resistance. According to the data, ZnSe nanoislands possess increased conductivity compared to (GaAs)1-x(Ge2)x solid solution. This implies that the carrier transport through nanoobjects is facilitated, if quantum dots

During epitaxial layer growth, a sufficiently thick and uniform assembly in properties can be formed from quantum-sized objects possessing higher electri­cal conductivity compared to the matrix than those prepared using AFM. ZnSe quantum dots on the sur­face and near-surface layer of (GaAs)1-x(Ge2)x solid solution can be formed using the LPE method.

Thus, analysis of AFM data shows that ZnSe nanoislands in (GaAs1-x(Ge2)x solid solution possess dome geometrical shape with lateral sizes of 55÷65 nm and the appearance of these forms of ZnSe nanois­lands is usually rationalized by elastic stress relaxation in dome configuration of the phase. During epitaxial film growth, a sufficiently thick and uniform assembly of quantum-sized objects by parameters was devel­oped, which possess higher conductivity compared to the matrix. The results of atomic force microscopy study confirm X-ray analysis data on the formation of nanoislands on the surface of the studied layered solid solution

Thus, on the basis of analysis of the technological modes of the synthesis of epitaxial layers of the (GaAs)1-x-y(Ge2)x(ZnSe)y, alloy on GaAs substrates and the results of the performed investigations, it is possible to make the following conclusions.

The work was performed under grant number F2-68 of the Republic of Uzbekistan.