Аpplication of mechatronic systems on the water and air transport

Sea transport. MS are increasingly used to intensify the work of the crews of sea and river vessels associated with the automation and mechanization of the main technical means, which include the main power plant with service systems and auxiliary mechanisms, the electric power system, general ship systems, steering devices and engines. Integrated automatic systems for keeping a vessel on a given trajectory (CPSS) or a vessel intended for exploration of the World Ocean on a given profile line (CPSS) are systems that provide the third level of control automation. The use of such systems allows:

- to increase the economic efficiency of sea transport by implementing the best trajectory, the movement of the vessel, taking into account the navigational and hydrometeorological conditions of navigation;

- to increase the economic efficiency of oceanographic, hydrographic and marine geological exploration work by increasing the accuracy of keeping the vessel on a given profile line, expanding the range of wind wave disturbances, which ensure the required quality of control, and increasing the operating speed of the vessel;

- to solve the problems of realizing the optimal trajectory of the vessel's movement in case of divergence with hazardous objects; to improve the safety of navigation in the vicinity of navigational hazards due to more precise control of the vessel's movement. Integrated automatic motion control systems according to a given program of geophysical research (ASUD) are designed to automatically bring the ship to a given profile line, automatically hold the geological and geophysical vessel on the investigated profile line, maneuver when transitioning from one profile line to another.

Under sea conditions, it is impossible to use conventional methods of preliminary exploration (prospecting party or detailed aerial photography), therefore the seismic method of geophysical research has become the most widespread (Fig. 1). A geophysical vessel 1 tows on a cable-rope 2 a pneumatic gun 3, which is a source of seismic vibrations, a seismographic streamer 4, on which receivers of reflected seismic vibrations are located, and an end buoy 5. The bottom profiles are determined by recording the intensity of seismic vibrations reflected from the boundary layers 6 different -breeds.

To obtain reliable geophysical information, the vessel must be held at a given position relative to the bottom (profile line) with high accuracy, despite the low speed (3-5 knots) and the presence of towed devices of considerable length (up to 3 km) with limited mechanical strength.

Anjutz has developed an integrated MS, which ensures keeping the vessel on a given trajectory. In fig. 2 is a block diagram of this system, which includes: gyrocompass 1; lag 2; instruments of navigation systems that determine the position of the vessel (two or more) 3; autopilot 4; mini-computer 5 (5a - interface, 5b - central storage device, 5c - central processing unit); punched tape reader 6; plotter 7; display 8; keyboard 9; steering gear 10.

With the help of the system under consideration, it is possible to automatically bring the ship to the programmed trajectory, which is set by the operator using the keyboard, which determines the geographic coordinates of the turning points. In this system, regardless of the information coming from any one group of instruments of the traditional radio navigation complex or satellite communication devices that determine the position of the vessel, the coordinates of the probable position of the vessel are calculated from the data issued by the gyrocompass and the log. 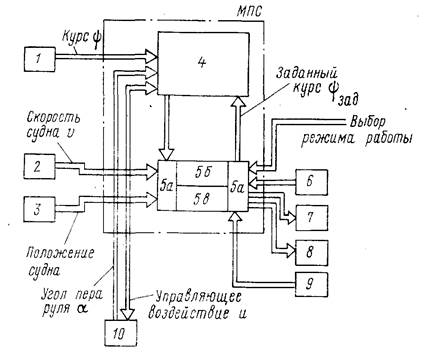 Figure 2. Block diagram of the integrated MS for keeping the vessel on a given trajectory

The control of the course with the help of the system under consideration is carried out by the autopilot, the input of which receives information about the value of the given course ψback, generated by the minicomputer taking into account the error in the position of the vessel. The system is assembled in a control panel. In its upper part there is a display with controls for adjusting the optimal image. Below, on the inclined field of the console, there is an autopilot with control levers. On the horizontal field of the control panel there is a keyboard, with the help of which programs are entered into the mini-computer. A switch is also located here, with the help of which the control mode is selected. A mini-computer and an interface are located in the basement part of the console. All peripheral equipment is placed on special stands or other consoles. The system under consideration can operate in three modes: "Course", "Monitor" and "Program". In the "Heading" mode, the preset course is held using the autopilot according to the gyrocompass readings. The "Monitor" mode is selected when the transition to the "Program" mode is being prepared, when this mode is interrupted or when the transition to this mode is completed. They switch to the "Course" mode when malfunctions of a minicomputer, power supplies or a radio navigation complex are detected. In this mode, the autopilot operates independently of the minicomputer. In the "Program" mode, the course is controlled according to the data of radio navigation devices (position sensors) or a gyrocompass.

Maintenance of the ship restraint system at the ZT is carried out by the operator from the console. The choice of a group of sensors for determining the position of the vessel is made by the operator according to the recommendations presented on the display screen. At the bottom of the screen is a list of all commands allowed for this mode that can be entered using the keyboard. Accidental pressing of any forbidden key is blocked by the computer.

In fig. 3.6 shows the block diagram of the remote control system of the RPV flight - HIMAT. The main component of the HIMAT remote control system is the remote control ground station. The RPV flight parameters are received at the ground point via a radio communication line from the aircraft, received and decoded by the telemetry processing station and transmitted to the ground part of the computing system, as well as to the information display devices at the ground control point. In addition, a picture of the external view, displayed with the help of a television camera, is received from the RPV board. The television image displayed on the screen of the ground workstation of the human operator is used to control the aircraft during air maneuvers, approach and landing itself. The cockpit of the ground station for remote control (operator's workstation) is equipped with instruments that provide indication of information about the flight and the state of the RPV complex equipment, as well as means for controlling the aircraft. In particular, the human operator has the roll and pitch control sticks and pedals of the aircraft, as well as the engine control stick. If the main control system fails, the control system commands are issued by means of a special console of discrete commands of the RPV operator. 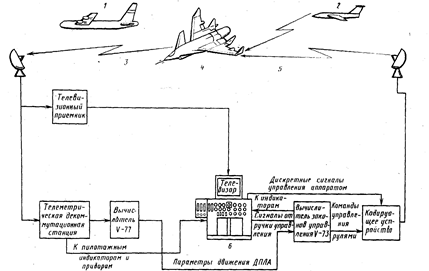