Investigation of Schottky diodes based on gallium nitride

The influence of the type of metallization and the technology of creating a contact system on the current-voltage characteristics of Schottky diodes made on the basis of epitaxial layers of gallium nitride is studied. The forward voltage drop on the diode reaches 2.5 V at a forward current density of 50 A /

, the leakage current density does not exceed 10-2 A/

Recently, much attention has been paid to the wide-band semiconductors gallium nitride (GaN), silicon carbide (SiC) and diamond as promising materials for creating efficient devices for power and high-temperature electronics. The technology of devices based on gallium nitride is developing most intensively, thanks to its use for the production of LEDs. At the same time, this semiconductor is also attractive for use in power electronics due to its sufficient speed and high breakdown voltage. To date, several types of diodes have been developed, which differ fundamentally in the structure and geometry of the contact arrangement. In particular, Schottky diodes with horizontal and vertical geometry of regions and contacts are intensively studied [1]. Diodes with a vertical structure are characterized by large forward currents, but so far they are characterized by low breakdown voltages and large leakage currents compared to diodes with a horizontal configuration. This is due to the insufficient quality of GAN substrates containing a sufficiently large number of defects for this technology and the design of diodes.

The aim of this work is to develop and study horizontal Schottky diodes based on epitaxial layers of gallium nitride. In this paper, possible variants of the formation of ohmic contacts are considered, and the forward and reverse current-voltage characteristics are investigated.

The technological process of manufacturing diodes consisted of four stages, including ion-beam etching of the mesastructure, the creation of ohmic contact with the active layer, the formation of a Schottky barrier at the border with the n-layer, passivation and protection of the crystal surface with a dielectric film. Ion-beam etching with

ions was used to form mesa insulation. Titanium obtained by magnetron sputtering was used as a mask. The etching rate of gallium nitride with this method is about 6 nm / min, and the selectivity with respect to the mask is 6:1.

Two methods were used to create low-resistance ohmic contacts. The first is a local increase in the doping level by ion implantation of the impurity in gallium nitride [2]. Silicon ion doping was performed at the Vesuvius-1 facility with an energy of 50 keV and a dose of

. In order to eliminate the effect of ion channeling, doping was carried out at a sample tilt of 7°. The impurity was activated by annealing in a nitrogen atmosphere at 900°C for an hour. Under such doping conditions, a profile with a maximum concentration of 2·

.at a depth of 0.2 microns. Then the contacts were formed on the basis of the Ti/Al/Ni/Au metallization system.

The second method is based on the introduction of a tantalum layer into the traditionally used metallization system [3]. Using a tantalum layer allows you to improve the quality of the ohmic contact formed to the high-resistance layer of gallium nitride [4]. The contacts in both cases were made using contact "explosive" photolithography followed by annealing in a nitrogen atmosphere. Schottky contacts with an area of 9

were formed on the basis of a Ni/Au system with a thickness of 20 nm and 150 nm, respectively. At the final stage, the crystal surface was passivated with a film SiO2 obtained by plasma chemical deposition.  In the course of the work, experimental samples of diode crystals with a size of 600×600 microns were made and studied. The measurements were carried out on a semi-automatic probe station Cascade Microtech 12000S. The Agilent B1500A semiconductor device performance meter was used to monitor the DC parameters.

The quality of three different variants of ohmic contacts was evaluated. First of all, traditional metallization based on the Ti/Al/Ni/Au system, formed on a high-resistance layer of gallium nitride, was used. In another variant, the same system was used, but with additional sub-editing of the contact areas. In the third option a tantalum sublayer was applied, resulting in five layers of Ta/Ti/Al/Ni/Au. The current-voltage characteristics of the listed contact systems are shown in Fig.1. As can be seen from Figure 1, the Ta/Ti/Al/Ni/Au metallization system has the lowest resistance. The contact resistance was estimated using the Transmission Length Method. The result is the following values of the specific contact resistance: Ti/Al/Ni/Au system (without sub — alloying) — 9.9· 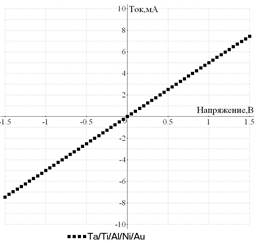 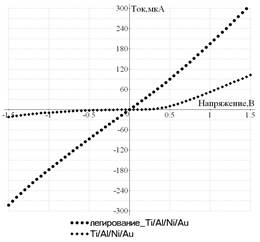 Figure 1. Current-voltage characteristics of ohmic contacts of Ta/Ti/Al/Ni/Au (a) and Ti/Al/Ni/Au (b) metallization systems

The results obtained demonstrate the prospects of using metallization with the addition of tantalum, as well as the technology of sub-alloying. The higher value of the specific contact resistance of metallization with sub-alloying is explained by an insufficient increase in the level of doping of the active layer due to incomplete activation of the impurity. The current-voltage characteristics of the instrument structures are shown in Fig. 2 and 3. 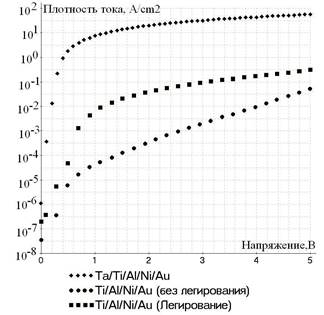 As can be seen from Fig. 2, the forward voltage drop of a structure with ohmic contacts based on Ta/Ti/Al/Ni/Au metallization is noticeably lower than that of other structures. This is due to the lower value of the contact resistance of the ohmic contacts. 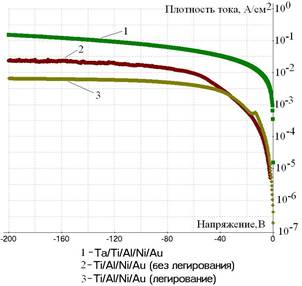 The inverse current-voltage characteristics do not have such a strong difference, since they are determined by the quality of the Schottky barrier, which was formed for all structures simultaneously. All structures have a breakdown voltage of about 700 V.

The characteristics of Schottky diodes based on epitaxial layers of gallium nitride with horizontal contacts are studied. Three possible variants of forming ohmic contacts for improving the direct characteristics of diode structures are considered. A tantalum-based metallization system is obtained, which makes it possible to obtain low-resistance ohmic contacts. The technology of ion doping of the sub-contact areas to reduce the contact resistance was tested. The diode structures are obtained and their current-voltage characteristics are investigated, the forward voltage drop reaches 2.5 V at a current density of 50 A / cm2, the leakage current density does not exceed 10-2 A/cm2 at a reverse voltage of 200 V.