The article describes the properties of the mass exchange process in a rotary filtration apparatus for wet cleaning of harmful gases formed during the production of mineral fertilizers and released into the atmosphere, the device of the working body of the apparatus, a film layer formed during the production of mineral fertilizers. described are a filtering material and a process of transferring a substance in a liquid bath. The article also proposes equations for the separate calculation of the coefficients of substance transfer in the gas and liquid phases for the rotor-filter apparatus.

As the world's population grows, so does the demand for more food, especially agricultural products. It is known that mineral fertilizers are widely used in the cultivation of agricultural products. Due to the fact that the processes and equipment for the production of mineral fertilizers are obsolete and need to be modernized, various gaseous raw materials and exhaust gases are released into the atmosphere.

This is causing environmental degradation, especially the depletion of the ozone layer, and global warming. Therefore, the creation of waste-free technologies and the retention of toxic gases and dust emitted into the environment through the modernization of existing machines and equipment is an urgent task. In the production of nitrogen, phosphorus and fluorine-bred mineral fertilizers, various dust gases are released, in particular, the hydrogen-fluoride gas in the dust formed in the production of superphosphate has a serious negative impact on the environment.

Therefore, the creation of effective methods and devices for the purification of such gas is attracting the attention of scientists. Fergana Nitrogen JSC also has a department for the production of superphosphate mineral fertilizers, from which the dust of superphosphate fertilizers and hydrogen fluoride gas is released into the atmosphere. The main goal of the study is to capture this emitted gas, return it to the technological process and separate it as a raw material for other related industrial enterprises.

The mass transfer in the rotating rotor apparatus in the working fluid contact elements is poorly studied [2; 6; 7]. When combining the results of experimental tests, the proposed calculation formulas differ from each other because the authors used different research methodologies. Given the physical and chemical properties of the dusty gas, the solubility of hydrogen fluoride and ammonia gas in the rotor-filter apparatus, it is advisable to use water, calcium technical soda and washing soda as absorbents. The main working body of the rotor-filter metabolism apparatus shown in Figure 1 is the rotor of various filtering materials. As a filter material in the rotor is used paronite with a hole diameter of 2; 3; 4 mm and a thickness of 1.5 mm, stainless metal mesh with a hole diameter of 1; 2; 3 mm.

In the proposed rotor-filter apparatus, a stream of dusty gas and an absorbent form mass transfer zones as follows. 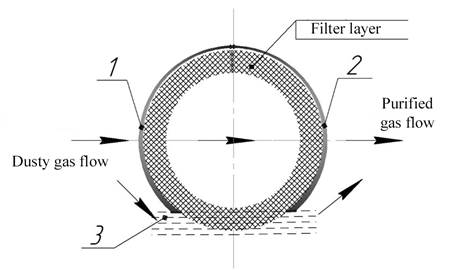 Figure 2. Scheme of contact surfaces formed in the rotor-filter apparatus:

Initially, the liquid from the injector spreads evenly over the rotor filter and forms the first film layer along the length of the falling surface. A stream of dusty gas entering from the diffuser hits the film layer and flows through the filter holes into the rotor. A stream of dusty gas moves through the rotor towards the confuser, where a relatively thin second film layer is formed, as on the diffuser side, and the gas is purified once more. In this contact zone, the components of the gas passing through the filter surface between the diffuser and the confuser are absorbed into the film layer. The third mass transfer zone is the liquid in the bath in which the rotor sinks, the gas stream entering from the diffuser hits the surface of the water collected in the bath, and a certain amount of dusty gas is removed by contact. Analysis of the mass transfer process in the wet-cleaning rotor filter apparatus shows that due to the complexity of determining the velocity and thickness of the film layer formed in the filter, the linear mass density of irrigation is used to determine the mass transfer coefficient in the liquid phase [8]:

- The average velocity of the liquid film, m/s;

П - the perimeter of the surface on which the film is formed, m.

Using this equation, the hydrodynamic regime of the film is calculated [7]. If the mode is laminar, the average velocity of the film flow is:

if turbulent, equation (3) can be used,

where, Г is the mass density of irrigation, kg/m*s; - working fluid density, kg/m3;

- coefficient of dynamic viscosity of the working fluid, Pa*s;

- the angle of inclination of the film layer relative to the horizontal plane. According to the law of similarity criteria, the mass transfer coefficient in the liquid phase can be calculated as follows:

-magnitudes depend on the device design and are determined by experimental tests. As a result of the introduction of a dusty gas stream into the apparatus at high temperatures, partial evaporation is observed in the working fluid, which is observed in the gas phase mass transfer, it is recommended to determine the mass transfer coefficient in the gas phase using the following equations:

(5) can be used if it is possible to determine the coefficient of friction in the contact zone where the gas stream moves [8],

is the coefficient of friction.

If the dimensions and hydrodynamic characteristics of the rotor located in the working volume of the apparatus are known, then the use of (6) or (7) is recommended [8].

is the length of the surface on which the film layer is formed, m;

is the equivalent diameter of the surface at the outlet of the gas stream diffuser, mm.

For the complexity of the hydrodynamics of the apparatus, the Stenten criterion, which takes into account the coefficient of hydraulic resistance, can also be used in the calculation of mass transfer [9],

It can be seen from the above equations that the following general equation is used to calculate the mass transfer coefficients in the liquid and gas phases,

Analyzing the above equations, it is expedient to calculate the process of mass transfer in the liquid phase in the rotor-filter apparatus by the following general equation,

is the amount of substance absorbed into the first film layer, kg or kmol.;

is the amount of substance absorbed as a result of hitting the surface of the liquid in the liquid bath, kg or kmol;

is the amount of substance absorbed into the second film layer, kg or kmol.

It follows from the above equations that its hydrodynamics play an important role in the calculation of the transfer process in a voluntary metabolic apparatus. In the production of mineral fertilizers, in particular, the production of superphosphate, fluoride briquettes are metabolic processes using the hydrodynamics of a rotor-filter apparatus designed to absorb and purify toxic gases from liquids;

Equation (8) shows that the high hydraulic resistance, low gas velocity and increased fluid consumption, and the thickening of the film layer improve the metabolism in the liquid phase.