Dependence of materials enlightenment on temperature

Since appearing nanoobjects and deal with them physical phenomena, the essential progress in optics had been taken. We can safely said that today development this science dominates, basically, in practical application while leaving behind to study the theoretical aspects any new physical effects. The enough interest and comparative little studied aspects of modern applied optics is enlightenment effect of materials.

This effect is very interesting because of practically in any substance has a definite temperature range (or additionally some parameters) by which one begins pass visible light radiation to some extent. Other words, substance will becomes somewhat transparence. It is interesting to investigate the conditions by which the substance becomes transparency in such parameters, at which most optoelectronic devices at present is working.

For example, in paper [1] had been investigated the optical properties of insulator medium where shown that presence of nanocavities layers near the borders section “environment-vacuum” which is able to increase the system transparency in a wide range of wavelength up to 100 %. And in Ref. [2] had shown that growing possibility of values of collimated coefficient of skin transmission 20÷40 times on dependence of wavelength and decreasing diffuse reflection coefficient up to 16 % by influencing water solution of glycerin.

Passing transverse electromagnetic wave via heterogeneous medium and appearing in some layer’s soliton like wave field bursts with its essential forcing due to sharp recline of wave vector value. In Ref. [4] based exactly solvable model task had been investigated.

In paper [5] the conditions and frequency band of total absorption of electromagnetic radiation in flat layer of absorbing insulator with covered to it of two enlightenment and non-absorbing layers, one of themselves has quarter wave thickness, had been found.

The enlightenment task in classical point of view considered in Ref. [6] where it had been introduced to case of many layers magnet-insulator systems. The possibilities of transmission of electromagnetic energy via thick (several skin-layers) insulator screen constructed from high attenuation coefficient in over high frequencies in paper [7] had been investigated.

It should be also noted that in Ref. [8] the increasing method of enlightenment zone in spherical surfaces of optical parts having great curvature by covered themselves the combined layers formatted using circular aperture in vacuum equipment had been proposed. By modeling spectral characteristics of Ge sub element of three GaInP/GaAs/Ge transmitting solar elements had been shown [9] that using GaInP nuclear layer creating thin diffuse p-n junction in Ge allows increase Ge sub element photo generated current in comparison of values in case of GaAs nuclear layer.

In the present paper the analysis of investigations results carried out in usual home conditions on studying of enlightenment process of some materials has been presented. Measuring the light radiation intensity by transferring via different thicknesses we calculated values of absorbing coefficients and enlightenment ones. The light beam in experiments we obtained from semiconductor laser diode ATC-C500-200 type working at 668 nanometer wavelength.

It is known, that by single photon absorbing of monochromatic radiation the enlightenment effect by this representation is described

Here I is the wave intensity in x point, k(I) is the absorbing degree depending on the intensity. Its form is defined with concrete physical enlightenment mechanism and character of absorb line broadening. For example, if enlightenment effect conditioned by saturation and absorb line is broadened uniformly then

Here ko is the absorb degree which figures in Buger-Labbert law, α is the saturation coefficient. Its physical meaning we shell find substituting condition

. After integrating equation (1) with substituting representation (2) we obtain

Here Ip is the integrating constant. Its value we find easily substituting x=0

I0 is the radiation intensity in entering moment to sample.

Further substituting representation (4) to one (3) we rewrite it as

As we see from representation (5), that the enlightenment investigate task of concrete sample leads to definition the k0 and α constants values. For convenience we will introduce following remarks

In result from representation (5) we will obtain the algebraic equation for two unknowns parameters, k0 and α

Here N is the measures quantity.

Onwards, because of in different measures the calculated values of ko and α parameters can be differ from each other we will take the following procedures.

The first, in all calculations of koi and αi parameters values we will calculate ones using xi and Ii values of i-th and previous (i-1)-th measurements. In this case, after solving equation (8) regarding k0 and α parameters we will obtain following representations

The second, in each measurement of koi and αi parameters values we will calculate separately and then their required values will find by averaging.

In order to obtain quantitative comparative picture as the samples we have prepared on 10 materials of white plastic, white organic glass and white laundry soap having rectangular parallelepiped shapes with wideness and height dimensions 2×2 centimeters and lengths from 1 up to 10 centimeters in normal thermodynamic conditions. The sample length in experiments we chose as x-axis.

The sequential structure scheme of experimental equipment in Figure 1 has been presented. In order both to exclude the ingress of external lighting to sample and radiation dissipation to environment we investigations have carried out in the darkened chamber. In that for measuring intensity entering to sample radiation from laser diode between radiation source and investigating sample we established the first luxmeter. After that we have measured the intensity this luxmeter for a definite period is removed. The light can be dissipated partly when it is passing by sample. Namely because of in exit of sample the collecting lens have been established. On its focus length the second luxmeter for measuring intensity of exit radiation has been established.

For establishing saving and measuring the temperature values in the darkened chamber we used the air heater, spiral oven and thermometer.

Changing consistently the samples by increasing their length from zero up to 10 centimeters for each of materials and supporting them approximately 2-3 seconds we have measured for each case the corresponding xi and Ii values. Using measured results we calculated values for Ai and Bi parameters with which one defined k0i and αi parameters values and finally their averaged values and absolute errors. These results in Table 1 have been presented.

As seen in Table that light passes via laundry soap better in comparison of plastic and organic glass. As to the absorb coefficient that its value for plastic greater than ones for organic glass and laundry soap.

Numerical results and their discussion

At the same time values for enlightenment coefficients which more relevant to enlightenment effect that its values obtained for plastic and organic glass are similar practically and for laundry soap in comparison of these materials is approximately 4 times less. It follows that the intensity dependence of the passing via itself light on thickness for laundry soap less in comparison of plastic and organic glass.

Further temperature in experiments we varied in range of 0÷100 oC with 10 oC interval. Taking into account of melting possibility of samples by temperature influence in the darkened chamber we put them to quarts cuvettes.

Dependence of enlightenment coefficients values of samples on the temperature obtained based on experimental results have been presented in Figure 2, where solid line corresponds to plastic, dashed and dotted lines correspond to organic glass and laundry soap, correspondingly.

It should be also noted that from studied three samples the enlightenment effect in case of laundry soap appears better in comparison of other two kind of materials. 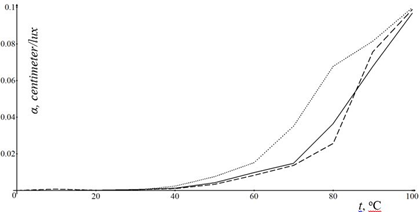 Figure 2. Dependence of enlightenment coefficients values of samples on the temperature obtained based on experimental results: solid line corresponds to plastic, dashed and dotted lines correspond to organic glass and laundry soap, correspondingly

Thus, based on analysis of results obtained from investigations of enlightenment effect of white plastic, organic glass and laundry soap at temperatures range 0÷100oC we can conclude the following.

The values obtained for enlightenment coefficients which more relevant to enlightenment effect that its values obtained for plastic and organic glass are similar practically and for laundry soap in comparison of these materials is approximately 4 times less. It follows that the intensity dependence of the passing via itself light on thickness for laundry soap less in comparison of plastic and organic glass.

It should be also noted that from studied three samples the enlightenment effect in case of laundry soap appears better in comparison of other two kind of materials.

Finally, from results presented on Table we can obtain the true values ranges estimations for α parameters of plastic, organic glass and laundry soap for normal thermodynamic conditions

N.T.Z. thanks the grant entitled Uzb-Ind-2021-96 for financial support of these investigations.