In the given paper it is reduced data on the common of properties of heat conduction of solids, in particular it is displayed their special difference in the course of heat transfer of uncrystalline and crystalline polymers

Introduction. When thermal conductivity is studied for solids, the equation of temperature, that is, the state resulting from the transfer of heat from the heated part to the rest, is understood. If a thin long rod is obtained, the temperature at the ends

, if  the length of the rod is

obtained, then the temperature gradient of

appears on the rod. This gradient creates a heat flow along the stem.

Fure's law of thermal conductivity is expressed as follows:

is the heat flux density vector (numerically, the amount of energy passing through the sample cross section per unit time)

All solids can be divided into three major groups in terms of heat transfer:

the bonds of a single polymer in the crystalline and amorphous state (Fig. 1).

The main element in the structure of crystalline polymers are crystallites. It is known that polymers are divided into rigid chain polymers and flexible chain polymers depending on the type of chain. Solid-chain polymers form straight-line chains. Flexible chain polymers, on the other hand, form crystal plates-lamellae, which are folded with a certain regularity during crystallization. The lamellae, in turn, form larger spherolites. As can be seen from the above, crystalline lattices lie at the base of the lamellae and spherolites. If, as a set of harmonic oscillators in a crystal lattice, the normal oscillations are not related to each other and the oscillation amplitude is temperature dependent, no uniform distribution of energy is observed in such a system due to the independence of the individual oscillations and the absence of energy effects. 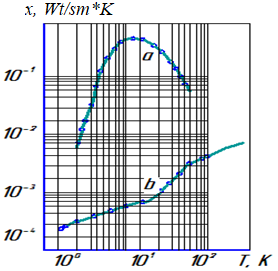 Debay proposed the following formula for determining the wavelength and thermal conductivity of grids [1]:

- is the heat capacity corresponding to the unit volume

- the average length of the path traversed by a free phonon

The duration of the phonon is as follows:

), the speed of sound is considered to be independent of the temperature at the Debay approach, since

crystals. If the temperature continues to drop, it will be

. At very low temperatures it is

, and varies with such regularity depending on the temperature 1. Thus, the thermal conductivity in crystalline polymers decreases with increasing temperature (Figure 1).

The development of a theory that allows the calculation of the thermal conductivity coefficient as a function of temperature is one of the serious problems in solid state physics. Some deviations are allowed in solving this problem, and this is certainly not always the case.

, and the size of a silicon tetrahedral cell is

. At one time, Clemens made the same point when analyzing thermal conductivity.

Due to the disordered arrangement of atoms in amorphous polymers, the elastic property of the polymer varies from one point to another. If an elastic wave is propagated in such a polymer, the propagation of the wave will be the same as in a non-homogeneous medium. Thus, the speed of phonons also varies from one point to another. This in turn leads to an increase in the thermal conductivity of amorphous polymers with increasing temperature (Figure 1).