This article provides an overview of modern experimental and theoretical studies of the work of pile-slab foundations. The existing design methods and practice of erection of buildings on pile-slab foundations, taking into account their characteristic features, are considered. Drilling injection piles made using CFA technology are described, its main advantages and disadvantages are analyzed in comparison with other technologies of a pile device. solutions will be offered to the construction industry.

Recently, the development of computer technology dictates new trends and rules of modern research. Now the solution of almost any problems of geomechanics is unthinkable without the use of a computer. In addition, model and full-scale experiments are clearly limited in the possible number of experiments. The complexity of numerical experiments is much lower and is not comparable with the complexity of full-scale and model experiments. An absolute advantage is the ability to test the behavior of an element or structure in situations that are almost impossible to organize in full-scale experiments.

Numerical modeling is the solution of problems that do not have a closed solution (exact solution) [2]. In this case, the exact solution of the problem is presented in the form of a set of numbers that allows the engineer to get the information of interest. The most widespread received: methods of finite differences, boundary elements, finite elements, etc. The finite element method (FEM) has been widely developed in recent years) [1, 2, 3, 4, 5, 6 et al.]. It is universal and allows you to calculate any design with the necessary degree of accuracy and taking into account the influence of a number of factors. The famous mathematician R. Courant [9] first formulated the foundations of the finite element method (FEM) and gave impetus to the writing of many works, in particular the works of I. Altenbach, K. Bate, K. Brebbia, E. Wilson, A. S. Gorodetsky, O. Zenkevich, R. V. Clough, J. Connor, K. Morgan, J. Auden, V. A. Postnov, L. A. Razin, G. Strang, R. Taylor, M. J. Turner, N. N. Shaposhnikov, etc.

The approach in which the deformed state of the system is first determined, and then the distribution of stresses in it is established, is convenient and universal for solving problems of geomechanics and is called the displacement method. The essence of the method is as follows: the system is sampled into individual elements of finite dimensions connected to each other in nodes. For each element, the nature of the relationship between displacements and internal forces in the nodes is known, and the interaction of individual finite elements is the work of the discretized system. The solution to the problem of determining the stress-strain state of the system will be a state in which the conditions of compatibility and equilibrium are met.

The accuracy of the calculation under equal conditions depends on the number of degrees of freedom (nodes) of the approximating system, the increase of which leads to its growth. This circumstance is due to the fact that the conditions for the compatibility of deformations are met only at the nodes of the discretized system, and along the contact line of the finite elements, deformations can experience discontinuities.

The study of the stress-strain state of the FEM soil foundation is possible on the basis of various models of a continuous medium (deformation linear and nonlinear elastic models, elastoplastic). All soils, like many other materials, show inelastic behavior of the soil, with the occurrence of permanent (plastic) deformation. In many respects, it depends on the choice of the foundation soil model and the adequacy of predicting the stress-strain state of the soil massif.

In this paper, to simulate numerical studies of the interaction of a single pile with the ground on a compressive load, a well-known model of the theory of plasticity was adopted, which is based on the Coulomb — Mohr strength condition [6, 7, 8], the shape of the yield surface in the space of the main stresses of which is a hexagonal pyramid. To calculate the base soil according to this model, it is necessary to have five main input parameters: the total deformation modulus E0, the Poisson's ratio v, the coupling c, the internal friction angle 𝜑 and the dilatancy angle ψ. Their determination is carried out according to the typical dependencies between stresses and deformations obtained from the results of the test under conditions of triaxial compression.

According to the requirements of modern regulatory documents, as well as according to many scientists, a significant part of modern geotechnical problems requires the use of numerical calculations that ensure the completeness and reliability of the results.

In connection with the popularity of FEM and the rapid growth of computer performance, a large number of software complexes have flooded into the market for computer programs for design, which captivate potential buyers with colorful illustrations. Nevertheless, the main criteria for choosing a particular software package should be the reliability of the calculation results and verification with the results of field observations.

The choice of software systems for conducting numerical modeling of the behavior of drill-injection piles to assess their load-bearing capacity was made in favor of two well-known among specialists in this field-Plaxis 2d and Midas GTS. The Plaxis 2d computational complex is designed for complex calculations of the stress-strain state and stability of geotechnical objects of various purposes by the finite element method in the conditions of a plane problem. This software package is designed for the design justification of the designed structures at the stages of construction, operation and reconstruction. The Plaxis 2D program allows you to effectively solve complex geotechnical problems of modern high-tech construction.

Midas GTS has been developing since 1989. The software package is designed for the calculation of geotechnical structures: tunnels, dams, dams, embankments, retaining walls, sheet piles, foundations of supports, piers, etc.Midas GTS makes it possible for engineers to intuitively create and analyze geotechnical and structural models in a complex. The modeling capabilities are well developed with integrated analysis capabilities that are strong with the unique capabilities of a balanced solver providing accurate results and fast calculations. In addition, the software automatically generates concise reports on the analysis performed. GTS is based on innovative technologies for calculating and designing tunnels and hydraulic structures.

The GTS program uses a multi-frontal Gaussian solver for systems with sparse matrices - one of the fastest solvers used in iterative nonlinear calculations of large-size spatial models.

The GTS program also supports two iterative solvers: PCG (conjugate gradient method) and GMRES (residual minimization method). Midas GTS implements 15 models of materials with elastic, elastic-plastic and other properties that can be set by the user.

To analyze the deformations that occur in piles at stresses corresponding to full-scale tests, a flat and three-dimensional formulation of the problem is chosen. The planar problem was modeled in Plaxis 2d and, due to the symmetry, the '/g of the full-size model was used (Figure 1, a), an axisymmetric problem. The spatial problem was solved in Midas GTS (Figure 1, b).

The obtained results of the precipitation from the action of the load are summarized in Table 1 and compared with the results of field tests of full-scale piles. The sediment obtained from the action of the Fa load, in the Plaxis software package, is designated scp, and in the Midas GTS-scM, the sa value corresponds to the full-scale data. The number of tests satisfies the minimum number to determine the reliability of the results and determine the required dependencies. 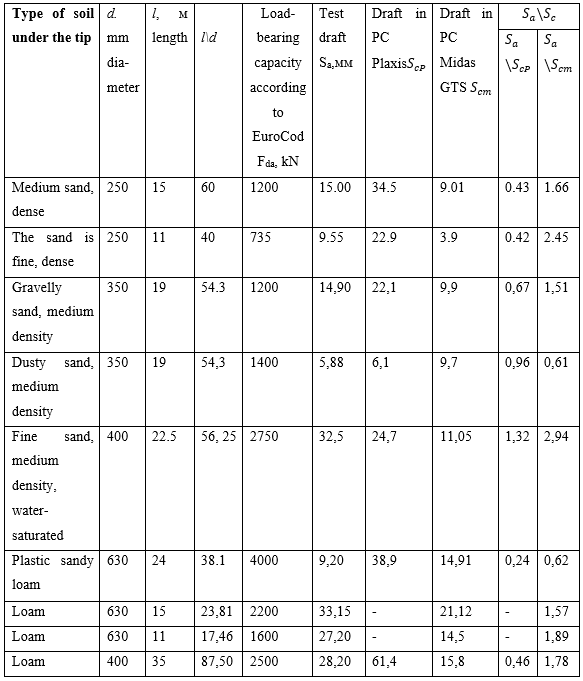 From the analysis of the results of solving the FEM problems in a flat and spatial setting, it was found that the final result is influenced by many factors that depend both on the initial data entered into the calculation and on the parameters selected by the program user. Among the main initial data that have a significant impact on the calculation result, the main properties of the material soil should be highlighted. These include the general modulus of deformation; the accuracy of its determination does not always meet the requirements of the calculation. In this regard, significant errors arise as a result of the calculation both towards the margin and towards the underestimation of deformations. Starting the calculation, the user chooses at his discretion a set of parameters and values, which also radically affect the result. The most significant are the number of nodes, the size of the mesh elements, and their geometry. There are guidelines and limits at which the required accuracy of the results is achieved. However, there are parameters for which there are no recommendations at all or are very poorly covered, and the user can set them based only on his own experience.

In connection with the above, it can be concluded that the FEM is a powerful tool in predicting the settlement of a bored injection pile from the action of the load. However, additional research is required to determine the initial parameters introduced into the calculation and to improve the quality of the data that determine the basic properties of the foundation soil.

kp = 1.99. These values of the correction factors were obtained on the basis of the existing database of field tests of bored injection piles. The database contains the results of more than 100 field tests of full-scale drill injection piles in the Kazakhstan territory. The database is open for adding new test results, as well as adapting it to other soil conditions. The expansion of the database will make it possible to more accurately determine the correction factors for the calculation of the bearing capacity of bored piles.