DETERMINATION OF THE CONTENT OF TRIPHENYLMETHANE DYES BY THIN-LAYER CHROMATOGRAPHY

The presence of some triphenylmethane dyes in their mixtures was determined by TLC using computer densitometry. The chromatography conditions that give the best separation and quality of the zones are selected. The dyes methylthymol blue, thymol blue and rhodamine C were determined.

Often, at analyzing a multicomponent mixture of organic and inorganic substances, the problem has arised of finding a method which at a relatively inexpensive design, would have sufficiently accurate measurement results. One of the most promising methods in this regard is the method of thin-layer chromatography (TLC). The simplicity and expressiveness of the method, as well as the high separation efficiency in combination with low equipment costs, make TLC a widely available method for mass analyses. However, this mainly concerns only qualitative and semi-quantitative analysis.

Currently, many investigations are being conducted in the field of quantitative thin-layer chromatography. At this, the analytical signal is the color intensity of the chromatographic zone on the digital image of the chromatogram, which in turn is processed using computer graphics editors [1]. Foreign companies, such as" CAMAG"," Desaga", offer fully automatic and specialized equipment for quantitative TLC, the simplest set of which will be quite expensive and for mass use such a solution is not suitable. the software market also offers a number of commercial programs designed to convert a digital image of the surface of a chromatographic plate into a "classic" chromatogram in the form of a graph. At the same time, many articles are published which the results are presented by replacing specialized equipment for quantitative TLC with an inexpensive camera, a standard graphic editor (for example, Adobe Photoshop) and a popular program for performing the necessary calculations, Microsoft Excel [2]. However in these articles a detailed algorithm for obtaining quantitative information from a digital image aren’t deserted. And for young researchers, this has caused certain problems with using of a bunch of these methods.

Triphenylmethane dyes are acid-base indicators that are widely used in analytical chemistry. In addition, dyes of this group have found application as components of chemical markers that are used in the inquiry of crimes [3]. For example, aluminone is used in analytical chemistry for the photometric determination of aluminum and vanadium. The weakening of the color of aluminum varnish is also used for the determination of fluorides. Xylenol orange and thymol blue are indicators used in complexometric titration. It is mainly used as a metallochromic indicator (color transition from red to yellow) is used for direct complexometric determination of zinc, calcium, cadmium, copper, iron, manganese, nickel, lead, bismuth, thorium, zirconium, gallium, scandium and other ions. Rhodamine dyes fluoresce, and simple and inexpensive methods of fluorimetry are used for detection. Rhodamine dyes are used in biotechnology, in such methods as fluorescence microscopy, flow cytometry and enzyme immunoassay.

The aim of the work was to determine triphenylmethane dyes in mixtures by TLC using computer densitometry.

EXPERIMENTAL PART. The following triphenylmethane dyes were used: methylthymol blue (dark purple), thymol blue (brown with greenish) and other rhodamine C (green powder which were prepared from crystalline preparations containing at least 99.9% of the base substance. The structural formulas of the dyes are shown in Fig. 1. The initial solutions of the dyes (1.0 g / l)were prepared according to the method of GOST R 52470 − 2005. Working solutions (0.1 g / l) were prepared by diluting the initial solution by water. 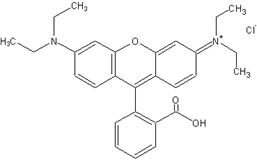 The colorants were determined by thin-layer chromatography on plates - "PTSH-AF-A (aluminum base)" - on an aluminum substrate with a working layer of fractionated broad-pored silica gel with thickness of 90-120 microns, fixed with a special binding component. The permissible thickness of the sorbent layer on one plate is ±5 microns. Standard solutions of dyes and analyzed solutions were applied with a micro-syringe of 1 µl per TLC plate. The plates were scanned on a flatbed scanner after chromatography and drying. The SORBFIL densitometer based on a lighting camera with the Sorbfil TLC View program (TU 4436-017-43636866-2007) is designed for calculating parameters and quantitative estimation in thin-layer chromatography.

THE OBTAINED RESULTS AND THEIR DISCUSSION

For the determination of dyes by TLC, the chromatography conditions were selected (Table.1.) It was found that the best separation and quality of the zones were obtained in the elution system: acetone-ethanol (6:4) [4].

You can calculate the tracks in any order, but it is more convenient to do it sequentially, starting from the first track. To calculate a track, select it by clicking on the track field. (The selected track is outlined with borders, its number is shown as a red number). Track calculation is performed by clicking the Track Calculation button (F9) on the toolbar. 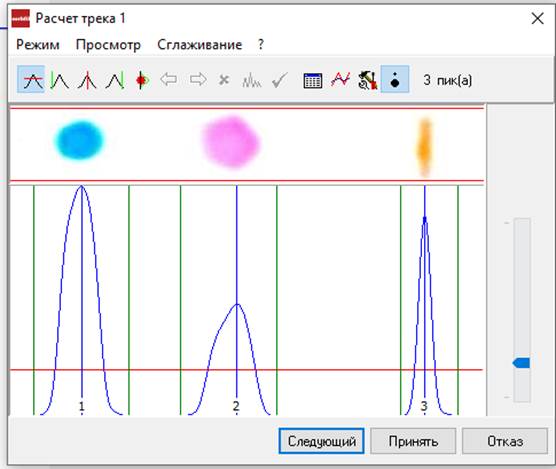 Figure 2. The obtained pyatina and the corresponding peaks at the analysis of ТB, MTB, RC

Track calculation results (Ctrl+T): When this command is enabled, the Track window displays the track calculation results: Rf, spot mileage L, peak area S, the ratio of the peak area to the sum of the areas of all peaks %S, peak height H, the ratio of the peak height to the sum of the heights of all peaks %H. The values %S and %H characterize the approximate content of substances in the mixture (weight percentages), NTP – the number of theoretical plates, uNTP – the specific number of theoretical plates, As – the peak asymmetry. In the window, you can give a description of individual peaks and the entire track. The chromatogram of the track is shown in the right part of the window. The track calculation results can be printed by clicking the Report button. (Fig. 3 and Table 1) 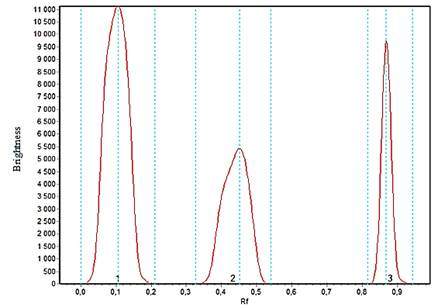 Figure 3. The dependence of the brightness on the Rf value at the analysis of ТB, MTB and RC

The method of determining synthetic dyes using TLC with the use of computer densitometry, which does not require expensive equipment and long-term sample preparation, has been elaborated. The chromatography conditions were selected and the MTB, ТB and RC were determined in the model mixtures.