The work was to study the effect of nerve growth factor (NGF) on the parameters of the antioxidant system in the rat brain. From the submandibular salivary glands of male mice, we isolated and purified fractions with nerve growth activity. We study the effect of NGF on the parameters of the antioxidant system – catalase, superoxide dismutase (SOD), and malon dialdehyde (MDA). It was found that the activity of catalase increases at a concentration of NGF of 5 μg, with a further growth of concentration of NGF a decrease in the activity of the enzyme was observed. SOD activity tends to increase at NGF concentrations of 5 and 25 μg. The decrease in the content of MDA is pronounced with the introduction of various concentrations of NGF. Thus, the activity of antioxidant enzymes tends to be restored in the presence of NGF. Neuroprotectors can exhibit therapeutic efficacy of antioxidants in neurodegenerative diseases and ischemic brain damage.

Neurodegenerative diseases are figuring larger among underlying causes of work decrement and mortality increase worldwide. The findings from numerous studies aiming at studying causes underlying the onset of the degenerative nerve diseases helped to identify the stages in intricate processes of their onset and progression. Hyperaggregation of the amyloid-beta protein, hyperphosphorylation  of the tau protein, free radical activation, changes in the sphingomyelin cycle, activation of microglia and inflammatory processes are thought to underlie the onset of neurodegenerative diseases [1,2,3,4]. Oxidative stress is thought to be a regulatory element in aging and various neurological disorders. An excess of oxidants causes a decrease in the amount of antioxidants, which in turn cause a redox imbalance in the body. Lack of antioxidant system causes oxidative stress, characterized by increased levels of active substances. The normal and proper functioning of the central nervous system (CNS) depends entirely on the chemical integrity of the brain. It is well known that the brain consumes large amounts of oxygen and is very rich in lipids, becoming susceptible to oxidative stress [5].

Neurotrophins are important neurotrophic factors involved in the survival, differentiation and functioning of a wide range of neuronal populations. A common feature of most neurotrophins is that they are synthesized in the form of precursor proteins (pro-neurotrophins), which, after proteolysis, make the mature active form responsible for most of their trophic functions. However, some pro-neurotrophin forms of these proteins, such as the precursor of nerve growth factor (NGF), have been shown to induce opposite effects and trigger apoptosis in neurons via the p75NTR receptor. This suggests that the balance between proneurotrophin and neurotrophin levels must be tightly controlled. It has been shown that under conditions of oxidative stress, caused, for example, by aging or the development of certain neurodegenerative diseases, neurotrophins are oxidatively modified, at least by glycation / lipoxidation end products, which render the precursors immune to maturation. Lack of maturation and an imbalance in favor of the precursor form can change the nature of active signaling pathways towards cell death, exacerbating harmful changes, for example, during the development of neurodegenerative diseases [6]. Neurotrophins change the metabolism of nerve cells through signaling cascades.

The aim of this work was to study the effect of NGF on the indicators of the antioxidant system in the rat brain.

The outbred rats weighing 300-350g kept on a standard diet with addition of cholesterol making up 2% of the food volume were used in the experiments. The experiments with animals were conducted in compliance with the requirements of the Commission on Bioethics and Humane Treatment of Laboratory Animals at the Institute of Biophysics and Biochemistry under Mizro Ulugbek National University of Uzbekistan, in accordance with the Animal Testing Regulations.

The animals were kept in the properly ventilated, illuminated and heated space with well-timed clean-up by 5 in one cage, and with free access to the food and water.

Prior to induction of the neurodegenerative disease, all rats were subjected to the behavioral tests to be chosen for the experiment [7].

From the submandibular salivary glands of male mice, we isolated and purified fractions with neurogrowth activity. We used the acetic acid fraction isolated from the submandibular glands to study the effect of NGF on the indicators of the antioxidant system in rat brain tissue in vitro. The determination of the content of malondialdehyde (MDA) is based on the reaction with 2-thiobarbituric acid with the formation of a colored trimethine complex (TMK) with an absorption maximum at 532 nm. Determination of catalase activity (EC 1.11.1.6) is based on the fact that undecomposed hydrogen peroxide forms a complex compound with ammonium molybdate (NH4) 6Мо7O24, colored yellow, the color intensity of which was measured on a photoelectric calorimeter at a wavelength λ = 410 nm against the control. Superoxide dismutase (SOD) activity was determined as described in [3]. Cary 60 spectrophotometer (Agilent Technologies, USA) was used to make optical measurements.  The data were processed by means of the Student’s t-test and the Origin 6.1 program. Significance level was at p≤0.05. 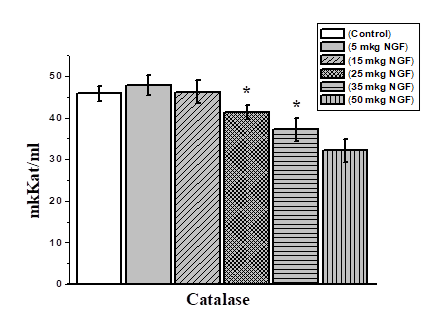 Under these conditions, the activity of the antioxidant defense enzyme, catalase, increases in the cerebral cortex, and the accumulation of free radical oxidation products decreases.

SOD activity tends to increase at NGF concentrations of 5 and 25 μg and sharply decreases at a concentration of 50 μg, which is apparently associated with saturation of the enzyme. SOD protects the body from superoxidation by maintaining optimal ROS levels (Fig. 2). NGF is able to stimulate SOD and, apparently, participate in the detoxification of one of the most frequent free radicals - superoxide radical. 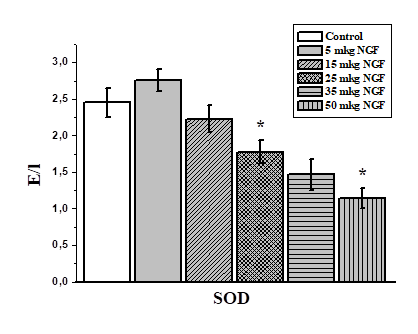 Figure 2. Effect of different concentrations of NGF on SOD activity.

The decrease in MDA content is pronounced with the introduction of various concentrations of NGF (Fig. 3). Moreover, the greatest decrease in the MDA content is observed at a concentration of 5 μg with a slight increase at 25 and 50 μg of NGF, which does not reach the control values. NGF prevents the accumulation of lipid peroxidation products, reducing the MDA content, and increases the activity of endogenous antioxidant systems - superoxide dismutase and catalase. 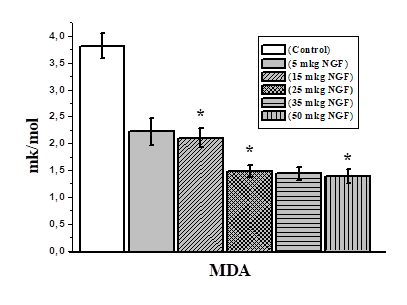 Figure: 3. Effect of different concentrations of NGF on MDA activity.

Neuroprotective agents may exhibit the therapeutic efficacy of antioxidants in neurodegenerative diseases and ischemic brain damage. The use of drugs with a predominantly antioxidant type of action is extremely promising. These drugs are safe, have a wide therapeutic range, and are also a type of therapy aimed not at reducing the symptoms of the disease, but at directly eliminating the damaging factors.

The data used to support the findings of this study are available from the corresponding author upon request.

The authors certify that they have no affiliations with or involvement in any organization or entity with any financial interest or nonfinancial interest in the subject matter or materials discussed in this manuscript. The research did not receive specific funding but was performed as part of the employment of the authors (Institute of Biophysics and Biochemistry under Mirzo Ulugbek National University of Uzbekistan, Tashkent, Uzbekistan).

The authors declare no conflicts of interest