The article provides information on the ecology, number and characteristics of seasonal and territorial distribution of Lepus capensis in the desert zone of Bukhara region, environmental factors affecting it and the species' adaptation to these influences. These data were obtained on the basis of our observations in the south-western part of the Kyzylkum, such as Karakir, Zamonbobo, Dengizkul, Khadicha, Zikri, Devkhona, Qumsulton and Ayak Ogitma, as well as in the Kagan fishery for 2012-2020. The study of the dynamics of the number of Lepus capensis is of great importance in predicting the increase and decrease of its number.

Introduction. Bukhara region is located in the south-west of Uzbekistan. Global environmental problems, in particular, anthropogenic factors, affect the environment, including the distribution and bioecological characteristics of mammals. In recent years, construction and construction of transport and railways, gas pipelines in these areas have also affected the biodiversity of the region. Dynamics of the number of Lepus capensis changes under the influence of biotic, abiotic and anthropogenic factors.

Materials and methods. A large part of the study area is composed of gypsum soils, rocks, sandy loam and sandy loam. wormwood Artemisia diffuse, heights  Anabasis eriopodava we observed that it is coated with a similar ephemeral, as well as ephemeroids. The study area was surveyed a total of 48 times on land using stationary and route counting methods [2; 3; 4;].

where D is the density; n is the number of birds encountered; L is the route length; W is the width of the route, or the distance from the route axis to the boundary of the calculated corridor. Multiplication 2 was used in the formula to account for the animals to the left and right of the route axis. [5; 6; 7].

Results analysis. Particular attention is paid to the management of the number of mammals, which are widespread in the world, important in nature and in the national economy, through a comprehensive study and their use in the interests of man. In particular, the expansion of the type and scale of human economic activity and the increasing impact on the environment require ecological sustainability in urban areas and the conservation of mammalian diversity. is focused. Special attention is paid in our country to the protection of nature, conservation of biological diversity and rational use of biological resources. As far as we know, any change in biotopes is manifested primarily on the basis of known changes in the lives of representatives of flora and fauna in the biocenosis. Representatives of the mammalian world are also considered to be ecological "indicators" of changes in the environment through their actions. Humans sometimes sense and evaluate the effects of biotic or abiotic factors occurring in the environment through these indicators. However, from the 1950s to the 1960s, the unfavorable environmental situation began to have a negative impact on the sand dunes - Lepus capensis, as well as representatives of the entire animal kingdom. As a result, the sand dunes - Lepus capensis - left the area one after another for a short time. This situation requires a re-analysis of their distribution ecology in the republic. It should be noted that the same changes have led to changes in the south-western regions of the country, the ethological characteristics of the sandpiper - Lepus capensis, the state of distribution, the nature of the encounter.

Today, sandstorms are increasing in the desert areas of Bukhara region. In particular, during the corona virus pandemic that shook the world in 2020, we observed a positive shift in the number of species in nature in a short period of time by partially limiting the negative impact of humans on nature. At the same time, the number of species increased compared to previous years due to unplanned hunting, poaching, and harvesting of plants as a result of human activities, with the exception of those traveling in the wild. This is definitely one of the positive things in nature. 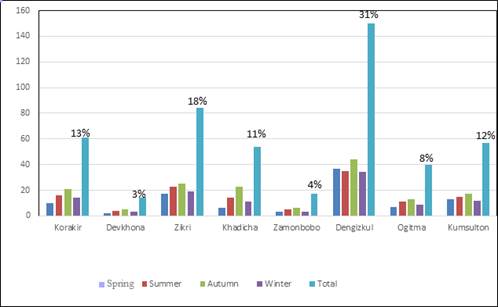 It was noted that the area, geographical location, ecological status and abundance of food resources, as well as the level of influence of anthropogenic factors play a decisive role.   In this regard, the main part of the number of sand dunes is recorded in Dengizkul (31%) and Zikri (18%) and Karakir deserts (13%), which have the most favorable ecological potential. The relatively low incidence of sand noise in the modern desert areas, the high level of anthropogenic impacts in these desert areas, the small area around Devkhana Lake and the poor vegetation cover show their effects. In nature, vegetation also plays an important role in influencing wildlife.

The analysis of our results shows that the highest number of sand dunes is observed in the deserts observed in summer and autumn. This indicator has been found to facilitate feeding, reproduction, and feeding in these deserts. The winter and spring seasons show a low number of sand dunes in the desert areas. It was found that this indicator is not conducive to feeding, reproduction in these deserts, as well as the fact that the hunting season in the autumn and winter months will lead to a partial reduction in the number of species. According to the data, in 1980-2000, in the desert zone bordering Alat, Karakul and Jondor districts, there were a lot of falconers, and in those days hunters hunted them mainly at night using the headlights of tractors and cars. At the same time, each hunter caught an average of 10 vultures per night. Now the natural landscape of these places has changed radically and the forests have disappeared. In the mentioned years, voles were hunted according to fixed terms, and voles were hunted not only as amateurs but also as industrial hunters. Its fur was received at special reception points and then processed. The sharp decline in the number of sandpipers and the abolition of their fur-bearing organizations has led to a decline in the importance of this species as a hunting object and interest in falconry. such as the harvesting of other plants as fuel and fodder, a sharp decrease in the sources of food and shelter for it due to the increase in the number of hooves, and other factors. In desert biocenoses, the increase in the number of foxes and chihuahuas, which are the natural enemies of sand dunes, leads to the intensification of "predator-type" biotic relationships, while the increase in livestock hooves in these areas leads to the emergence of trophic relations in the form of competition. Both situations are manifested in a decrease in the number of speakers. In May 2018, in the Khojam-Sayyod area of Karakul district, a baby boy was found killed in a nest of chickens. We also observed a pair of yellow sorrels feeding on the sand dunes on October 20, 2020, around Lake Foot.

The life of the sandpiper, like other species that are hunted, is not directly related to water bodies. However, we have observed that the sparse vegetation of the desert zone is attracted by the sparsely covered reeds and sedges of these species along the lake shore. Given that this species lives mainly on lands belonging to the forest fund, it can be said that the solution of problems in the field of forest protection is important in the protection of sand dunes and the proper use of sand. From this point of view, it is expedient for forestry and hunting farms to coordinate their activities in the protection of sand dunes as a hunting object, to pay attention to the issues of afforestation and pasture rehabilitation.

Conclusion: I it should be noted that the formation of artificial water basins in the desert zone is of great importance in the lives of sand dunes. In doing so, we found that some species may change their previous habitats in part depending on natural environmental conditions. However, there are a number of disadvantages in these watersheds that prevent these species from adapting to the region.

From this we can conclude that the formation of a fully adapted stable population of Lepus capensis  in the observed desert biocenosis is still ongoing.