Universum: химия и биология Архив выпусков журнала "Химия и биология" 2021 4(82) Study of the influence of imported trees on the mycobiota of the vegetation of Azerbaijan

Both local and imported trees are used in the formation of biodiversity in any region, as well as during landscaping. The introduced plants also create a new ecological environment for fungi, which are natural plant pollutants as well as their pathogenic species. They easily settle on plants and affect the introduction process. In addition, plants transferred from one environment to another are a potential source of spread of pathogenic species. Pathogens that accidentally enter the region or accompany the plant can pose a serious threat to the plants themselves and nearby native plants. This has happened on many occasions. The aim of this work is to study pathogens on imported trees and their effect on trees. During the study, both microscopic and macroscopic fungi were found.

Microscopic fungi cause various diseases of trees, shrubs, as a result of which the normal metabolism of plants is disturbed, leading to a decrease in their productivity, and sometimes to death [3,p.6-9]. The death of trees and shrubs leads to a sharp restructuring of the entire plant community: the enrichment of the atmosphere with oxygen, water-regulating, water-protective and soil-protective functions are disrupted, the yield of berries, medicinal plants, etc. Among the causative agents of diseases of tree species, there are fungi confined to one tree or shrub species or to several species. Some pathogens affect seedlings, others - young trees, mature trees, freshly cut wood or wood in warehouses and in structures, etc. [1, p. 20].

During the separation of macromycetes, the fruiting body formed by the fungus in the plant, basidioma, was used. The carcass was used to obtain a pure culture in the laboratory after certification, which is possible in the field. For this purpose, small particles (0.2-0.5x0.2-0.5 cm) are cut from the hymenophore part of the fruit body with a sterilized lancet and transferred to the nutrient medium, and as the colony is formed, it is transferred to the new medium and the process continues until a homogeneous colony is obtained.

Obligate saprotrophs are distinguished depending on the nutritional needs of pathogens of trees and shrubs. These are micromycetes that are unable to develop on living tissues and live only on dead wood. These include warehouse and house mushrooms that destroy wood in warehouses and in buildings, micromycetes that cause superficial mold growth of fruits, seeds, blue wood (pathogens of blue wood usually develop on freshly cut wood, giving it a blue tint).

Fungi, usually living saprotrophically, but infecting living plants, often weakened by adverse environmental influences, are called facultative parasites or semi-saprotrophs. These are the causative agents of the disease that causes lodging of seedlings of woody plants [6,p.315-340].

In contrast to semisaprotrophs, facultative saprotrophs usually lead a parasitic lifestyle. Their development cycle is two-phase: during the growing season, they parasitize on living trees and shrubs, and complete the cycle saprotrophically on fallen leaves, needles, dried branches, etc. Mushrooms of this group are represented mainly by marsupials (Ascomycetes) and imperfect (Deuteromycetes) (pic. 1). 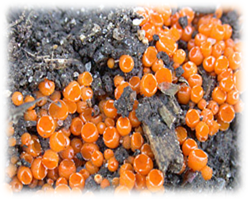 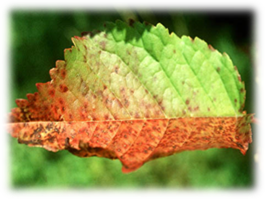 Necrotrophs feed on dead plant tissues, but previously killed by toxic secretions of the pathogen itself [2, р.70]. These mushrooms include species of the genus Fusarium (Fuzarium) (pic.2), which cause wilting of seedlings of many woody and other plants. 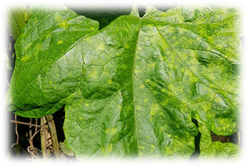 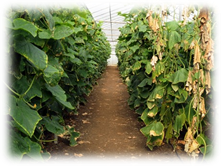 Obligate parasites, or biotrophs - fungi that constantly live on living tissues of a tree and have lost the ability to saprotrophic nutrition, these include powdery mildews, taphrinales (order Taphrinales) (pic.3) and rust. 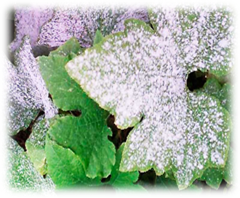 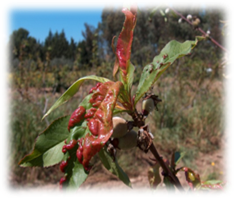 Fruit deformations refer to marsupial mushrooms from the genus Taphrina, which most often affect stone fruit species (bird cherry, cherry plum, plum, etc.). The mechanism of action of the fungus on the fruits of stone fruits is as follows: the mycelium, spreading through the tissues of the ovary, causes its growth and at the same time leads to suppression of the development of the bone. As a result, bag-shaped, ugly bodies "pockets" or "blown fruits" are formed. The entire surface of such fruits consists of closely spaced bags of the pathogen, which ripen in the second half of the summer and then emit spores that infect kidney scales. The deformation of alder and poplar fruits is also caused by mushrooms wintering in the buds, from where in the spring after flowering it penetrates into female catkins. In alder, the disease manifests itself in the deformation of the seeds and the growth of scales into ugly formations. Seed productivity of affected trees is significantly reduced [5, p. 15].

Powdery mildew. On leaves and non-lignified shoots, you can often see a cobweb, loose mycelium, which is subsequently covered with a mealy bloom from developing conidia. This is a sign of plant disease. The disease is called powdery mildew. Young shoots affected by it are deformed, bent, leaves curl. Powdery mildew is caused by powdery mildew fungi. The different types of these fungi have a similar development cycle. During the growing season, the loose mycelium gradually thickens and sometimes turns brown. The conidial stage, which is the same in all types of powdery mildews (spores develop in a chain on cylindrical conidiophores), is replaced by the marsupial stage. If in the conidial stage powdery mildew fungi are difficult to distinguish even when viewed under a microscope, then in the marsupial stage they can be easily distinguished by the structure of the processes on the fruit bodies and by the number of bags in them. Powdery mildew mushrooms overwinter more often on fallen leaves or on affected shoots, and sometimes in the buds of diseased organs. In the spring, after the bags have ripened and the fruit bodies have been destroyed, the ascospores infect the plants [4,p.110-120].

Micromycetes, causative agents of vascular diseases, have an even stronger effect on young and mature tree species. They cause withering or drying out of the entire crown or its individual parts due to damage to the conducting system, which manifests itself in darkening of blood vessels (on transverse sections of diseased branches, trunks, it is noticeable in the form of continuous fields, and on longitudinal sections - in the form of dashed lines). Darkening of blood vessels is the result of the activity of the mycelium of the pathogen.

At the final stage of the research, experiments were conducted to obtain information on the diseases caused by pathogenic fungi involved in the formation of mycobiota of trees in the vegetation of Azerbaijan, their prevalence and development cycles of some pathogens. It has become clear that the most common diseases are brown rot and spot disease, which are also caused by different types of fungi. Most of these fungi have been observed in introduced trees. As can be seen, the most common diseases are Japanese saffron, southern willow, common poplar, white mulberry, etc. plants. In general, it should be noted that trees growing in Azerbaijan have different resistance to fungal diseases, which makes it appropriate to characterize these trees in this regard, and the main distinguishing criterion in this regard is the prevalence of diseases.