This article analyzes the concept of "Sarakhbor". Srakhbori Segoh maqom is analyzed in terms of poetry and music. Its historical origins are covered in detail. Excerpts from the theme of maqom are also cited as examples. The interrelationship of poetry and music has been explored.

Sarakhbor is the main part of the maqoms that starts the singing section. "Sar" is the Tajik word for "head", "beginning", "news" - the Arabic word for "message". In the science of music, the term maqom (tani maqom) was first used by S. Urmavi (XIII century) in relation to the highest varieties of jams.

At the beginning of the 17th century, after the work of Darvesh ali Changi, the science of classical musicology weakened a little, and the concept and terms of maqom began to remain in the memory of teachers. For this reason, verbal quality terms have been introduced into the composition of our classical music Shashmaqom. For example, it has been acknowledged in the sources that concepts such as Sarakhbor, interpretation, and difficulty have entered into practice. Sarakhbor corresponds to the term "qawl" used in the treatises of Maraghi and Kavkabi. The suffix "sar" added to the word indicates that this part is in the primary function. This addition may also have originated with the method of Sarakhbor, as Sarakhbor's method is the same as the primitive method called "zarb-ul qadim" in the pamphlets. In the literature of musicologists, the content is described in close and similar terms, and I.Rajabov in the scientific monograph textbook "Maqomlar" says: The definition refers to the category, suggesting that "this phrase is the main way of singing, which indicates the structure of the song series, the main theme of the song section." Shashmaqom, a number of musicologists, maqom scholars and performers who have done research on our national classical music, have similar views on the Sarakhbors. In particular, O. Matyokubov in the textbook "Introduction to the basics of professional music in the oral tradition" and in the monograph "Maqomat":  “Sarakhbor is the beginning of the Shashmaqom singing sections, which signals the beginning”. So, Sarakhbor is not only the leading, starting part of the (indicative) singing department, but also the starting point of the whole maqom series.

Each maqom, which is part of the Shashmaqom, has its own history, content and essence, and the traditions of performance have emerged and have been performed and developed by skilled musicians and singers.

Information about Segoh maqom can be found in a number of musical pamphlets, epics and fiction books. They are also basically brief descriptions of Segoh. That is, musical treatises created from the XII century to the XVIII century contain ideas about Segoh and the melodies, songs and their names that are part of this maqom.

The term "Segoh" is used in various senses. They saw one idea, the segoh, as the "three places" - the place of sound that forms the three curtains of the instrument. Musicologist Ishaq Rajabov: “The melodies and songs performed from the third act of the maqoms, which are part of the system of twelve maqoms, are considered to be the segoh of these maqoms. Shashmaqom has a special maqom known as Segoh, which is based on Hijaz maqom and Segoh branch. ” In this way, the scholar also provided a theoretical basis for the origin of the maqom of Segoh in Shashmaqom. Although the first appearances of the Segoh did not occur at the maqom level, they did occur as ancient subspecies. Shashmaqom is one of the six maqoms in the formation.

The sound of the Segoh maqom is performed on the curtains corresponding to the doric and eolian lads, and its sixth step changes from time to time around or halfway up the half-curtain. This is the case for all of Segoh's musical instruments. However, the Shashmaqom music books (which had been available to the author of this article) published in Uzbekistan and Tajikistan do not pay attention to this, and do not take into account the following scenarios of curtain fluctuations.

The singing section of the Segoh maqom begins with the Sarahbori Segoh branch. It is written in d dori lad, and the subject illuminates heaviness, longing, and sorrow. The beginning of the work written in 2/4 scale (rhythm) from za takt, ie from the second part, (in some editions from 4/4 scale) from VII stage, is the basis for illuminating the subject of hijran. The sarcastic circle method adds a rhythmic feature to the theme.

His first letter is income, the second letter is a miyankhat performed in the middle of the stage, and it is recorded in the ghazal by means of melodies uttered with long vowel sounds such as “o” which are not related to words. The third and fourth letters of Sarahbori Segoh are part of the dunasr, which is repeated in the upper curtains of income and miyonhat. The fifth and sixth letters consist of the type and tone of Oraz, and the eighth letter consists of parts of the utterance that are recited together with the tones.

The concept of subject matter in the maqom of Sarahbori Segoh expresses a deep philosophy. The basis of the topic can be approached with different concluding remarks. The performance itself, which is linked to Navoi's above ghazal, also has different meanings. On the other hand, love for Allah and love for the deeds commanded by Allah can be analyzed with the knowledge of the teachings. It is possible to understand the hijra on the way to the sanctuary even deeper, and this is the essence of the musical theme, the essence of the melody. "Maqom" is also famous for such a series. At the same time, the subject is a clear image that is embedded in the whole work and an element that can be "explosive" in terms of dynamics. The theme is the motivation for the whole piece. And the theme is the image and affirmation of the sometimes sweet and sometimes bitter hijra from the beginning to the end of the work. It accumulates the energy of movement and determines its character and direction. The theme is a bright, selective creative thought, a tone based on an idea rich in concluding remarks, with the power to drive contrasting musical discourse. 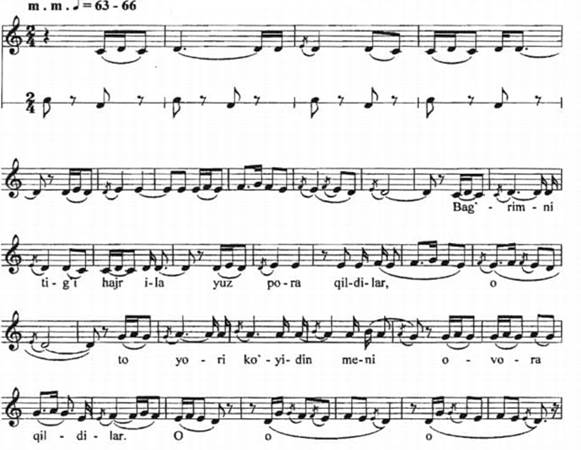 Although D is written in the lad, it begins with the sound of the VII pitch and is played slowly in the weak part. Starting with a hexadecimal note length, we make sure that the eight strokes come in a quarter stitch and confirm the d dari ladid. At the same time, the listener feels that Sarakhbori is the subject of Segoh, and in his heart there are hijra-nostalgia buds ....

The preface of the instrument confirms the theme and this theme serves as the basis for the whole work. At the beginning of the speech, the subject begins with the verse, "My heart was bribed with a razor blade." The melody and the words are in harmony, and in harmony they begin to sound as if a person who has a face in exile is opening his sighs.

Sarakhbori Segoh maqom can be called a monodic work. Although performed in harmony with the instrument and the ensemble, the melody consists mainly of one voice. That is why it has features peculiar to melodic themes. The theme is structured on an initial basis, the melodic theme is sounded, renewed and developed one after another in continuous intonation elements. It can be seen that Sarakhbori Segoh maqom belongs to the type of melodic theme. The presence of a primary foundation is of great importance. In addition, the gradual development of the themes, the formation of melodies on the basis of small changes that occur throughout the work, illuminates the theme. Of course, it is possible to feel the image of the ancient past, the countries of the Far East.

The musical theme has a philosophy and a rich rhythm. The Sarahbor method also plays an important role. In addition to the method, there is a deep philosophy in the rhythm of Sarakhbori Segoh maqom.

For example, even in this rhythm, the listener instinctively feels strange. Since the maqom is also related to the desired weight, the above rhythm also expresses commonality with weight. At the same time, a melodic melody and rhythm create a specific (clear, bright) theme in harmony.

In the maqom of Sarakhbori Segoh, we were amazed by the attractiveness of the musical theme, which can be analyzed from a different philosophical point of view. On the one hand, the third bond between the two lovers is a musical expression of nostalgia, hijra, and on the other hand, it is human and Allah, the third nostalgia is the inner experience, the state of mind, the zeal for religion, and the longing for the sacred corner.